The Myth of the Population Bomb 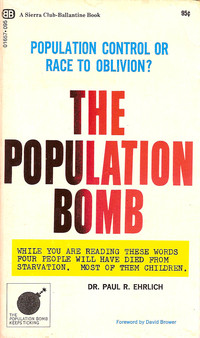 The battle to feed all of humanity is over. In the 1970s hundreds of millions of people will starve to death in spite of any crash programs embarked upon now. At this late date nothing can prevent a substantial increase in the world death rate.

That was what Paul Erlich wrote in his book, “Population Bomb” in 1968.

Erlich wasn’t the first person to believe that a growing population is a threat to stability.

Two centuries earlier, Thomas Malthus wrote “An Essay on the Principle of Population”:

The constant effort towards population... increases the number of people before the means of subsistence are increased. The food therefore which before supported seven millions must now be divided among seven millions and a half or eight millions. The poor consequently must live much worse, and many of them be reduced to severe distress. The number of labourers also being above the proportion of the work in the market, the price of labour must tend toward a decrease, while the price of provisions would at the same time tend to rise. The labourer therefore must work harder to earn the same as he did before.

In between Malthus and Erlich, a variety of population control advocates popped up.

Chief among them was Margaret Sanger, the inspiration behind Planned Parenthood and a noted defender of abortion and birth control.   Sanger memorably said:

The most merciful thing that the large family does to one of its infant members is to kill it.

[We should] apply a stern and rigid policy of sterilization and segregation to that grade of population whose progeny is tainted, or whose inheritance is such that objectionable traits may be transmitted to offspring.

Population control, coupled with birth control, is the inspiration of two groups that have an outsized influence over the Republican Party when it comes to immigration.  Numbers USA and FAIR (the Federation for American Immigration Reform) fit into this long history of population paranoia.

According to Wikipedia, John Tanton, the founder of both organizations, has been tied to pro-abortion groups.

Under Tanton's leadership FAIR was criticized for taking funding for many years from the Pioneer Fund, a non-profit foundation dedicated to “improving the character of the American people” by, among other things, promoting the practice of eugenics, or selective breeding.

According to the New York Times:

Dr. Tanton founded local chapters of Planned Parenthood and the Sierra Club and became the national president of Zero Population Growth. Unable to interest colleagues in fighting immigration, he formed FAIR in 1979, pledging in his proposal to make it “centrist/liberal in political orientation.” The first director, Roger Conner, had made his mark as a liberal environmental advocate.

Also according to the Times:

Soon followed the news that FAIR had received grants from the Pioneer Fund, whose most famous grantee was William B. Shockley, the Nobel-winning physicist who argued that for genetic reasons, blacks are intellectually inferior to whites.

He corresponded with Sam G. Dickson, a Georgia lawyer for the Ku Klux Klan, who sits on the board of The Barnes Review, a magazine that, among other things, questions “the so-called Holocaust.” Dr. Tanton promoted the work of Jared Taylor, whose magazine, American Renaissance, warned: “America is an increasingly dangerous and disagreeable place because of growing numbers of blacks and Hispanics. (To Mr. Taylor, Dr. Tanton wrote, “You are saying a lot of things that need to be said.”)

Beyond immigration, he revived an old interest in eugenics, another field trailed by a history of racial and class prejudice.

Both FAIR and Numbers USA have been around a long time, and like Planned Parenthood, over the years, they lose their ability to shock.  They have become part of the mainstream.  Liberal Catholics who should be appalled at the original mission of Planned Parenthood, which was to exterminate Catholics who Margaret Sanger deemed unworthy and a threat to our national stability.  Instead, they defend it.

Conservative Republicans, who now ostensibly fight for pro-life principles, accept the arguments from Numbers USA as it they were Gospel, ignoring the intellectual basis for those arguments in the first place, that we have too many people and we need to get rid of them by any means necessary.

There are many problems with Paul Erlich’s and Thomas Malthus’s original theories.  Chief among those problems is that they were fundamentally wrong.

When measures are put in place to stem population growth or to stem immigration, economies stagnate.  Abortion was widely used in socialist and communist countries in the Eastern bloc nations, and their economies have been a wreck.  Population stagnation has killed the Japanese economy.  And a day of reckoning will happen in China.  Their one-child policy is a ticking time bomb that will eventually destroy their economy.

Numbers USA and FAIR are organizations that promote dangerous population theories that are proven fundamentally wrong when the theories are put to the test.   Republicans should stop taking those arguments seriously.