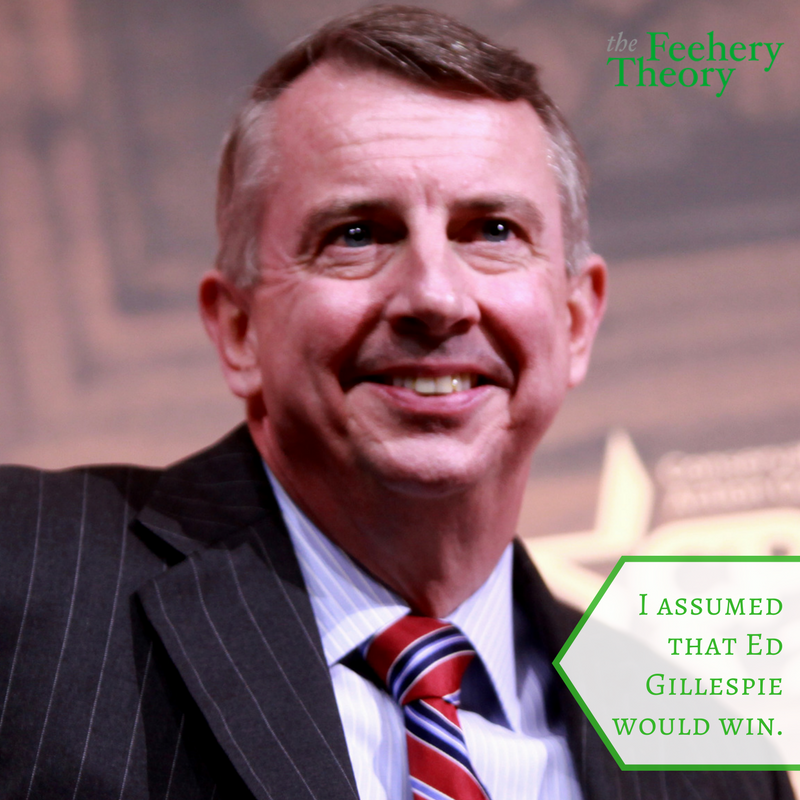 When I assume, I make an ass out of me.

I assumed that Ed Gillespie would win.

I assumed that Ed would win because Ralph Northam was a ho-hum candidate who went out of his way to alienate key parts of his wacky base and I thought Gillespie would do better in the Northern Suburbs than he did.

Ed Gillespie’s most attractive attribute is his work ethic.  Nobody will outwork Ed, ever.

And he worked the Commonwealth for two whole years, after losing a very tight race for Senate.  He visited every local Chamber of Commerce, every county fair, every Rotary club meeting.  I got tired just watching him on Facebook.

But Ed’s hard work wasn’t going to be enough.  You can swim against a rip tide as hard as you want, and it won’t do one damn bit of good if it is pulling you out to sea.

It is easy to say that it was the Trump riptide that pulled Gillespie out to see.  Easy to say because it is largely true.

Could Ed have run a better campaign?  Maybe, but I don’t think it would have made any difference.

My friends, Virginia is now a blue state.  And it will stay blue as long as Republicans go out of their way to alienate immigrants, Federal workers, and suburban soccer moms.

It rained buckets on election day in Northern Virginia and nobody showed up at the polls after 6 PM, and yet it didn’t matter.

Voters were so energized to send a message to Mr. Trump that they voted early before the rain could come, way before the polls could close.

Now, will the Virginia loss translate to other places and other states?  Yes and no.

Yes, the suburbs are a real problem for Republicans no matter where they are.  We see that in lost state legislative races in places like Richmond and Georgia.

Part of that is the changing demographics of the suburbs, which are becoming more Hispanic and more Asian all the time, as wealthier Republicans move back into the bigger cities, and poor Republicans move farther out into the country.

Part of it is bad messaging from President Trump.  Most soccer moms don’t like the President’s heavily charged rhetoric on race, they think he is a sexist who did bad things before he became President, and they don’t share Steve Bannon’s negative view of multiculturalism.   And female suburban voters are going to turn out against Republicans in the suburbs unless they get some victories on health care and education, do something on gun violence, invest in infrastructure and stop talking about repealing Roe V. Wade.

That being said, Virginia, especially Northern Virginia, is a special place.

Northern Virginia voters are much more diverse than almost anywhere else in the country (outside of San Francisco and New York City).  Their economic fortunes are tied directly to the largesse of the Federal government.  They are perhaps the most sophisticated voters in the country because Washington is a company town and what the company produces is politics.

So do I necessarily think that yesterday’s vote spells the doom for Republican control of the Congress?

Not necessarily, but Republicans shouldn’t ignore the real message coming from the voters.

So, if the party wants to survive the midterms, it has to get to work.

It has to first pass the tax cut package.

It then has to prove it can govern.  It has to work with the President and with Democrats to cut deals immigration, on health care, on opioid addiction, on education funding, and hopefully, infrastructure.

Imagine if Gillespie spent more time campaigning with President Trump, promising to expand US 66 and US 95, while promising to get more funding for Metro.  Trump’s a builder.  You would think it would have been a natural fit.  And it would have resonated with suburban voters, no matter how unpopular the President is with them.

The reason he didn’t, of course, is that the voters in the rest of the Commonwealth don’t care that much about Northern Virginia’s traffic problems, but if you want to appeal to the suburban voter, promise to make their commute smoother.

Everybody hates traffic and if voters think you have a plan to make it better, you will win bipartisan support.

Infrastructure has to be a key component in the Republican revival.

The President won last year because the voters wanted somebody to rebuild the economy and they liked his promise to build more roads and bridges.

But the voter sent an unmistakable message that Mr. Trump and his Congressional allies that they aren't happy with either one's performance thus far, and that they better get their act together sooner, rather than later.