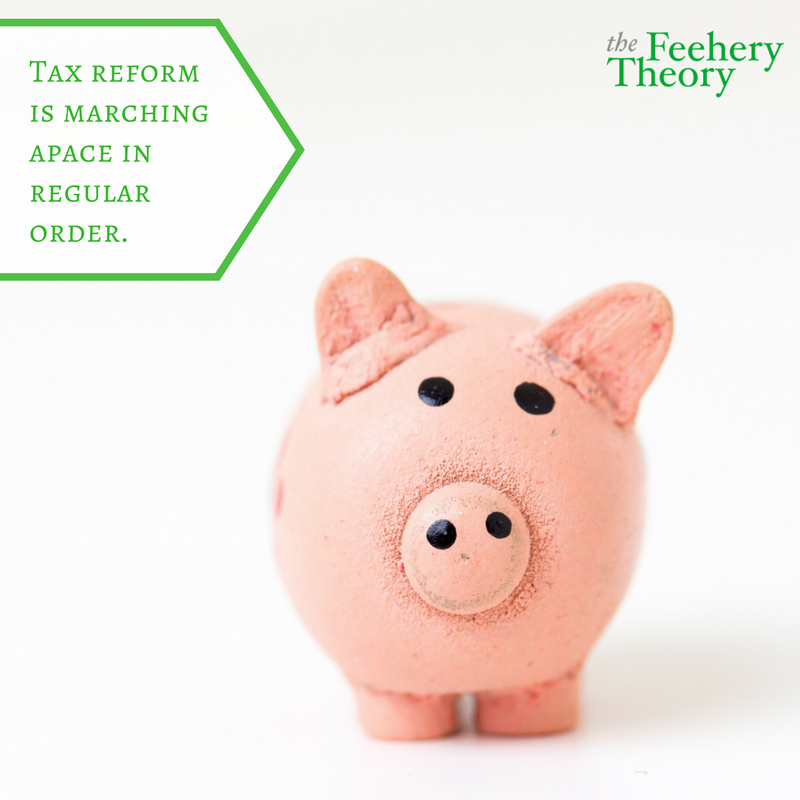 Congressional Democrats are bemoaning a process that is fair, thorough and realistic at its core.

Members and staff on the Committees of jurisdiction in both bodies have looked at every angle, examined every precedent, talked to countless tax experts throughout the country, and have come up with a workmanlike work product.

There are a lot of tax law experts out there and if you ask any of them about the products that have emerged from the House Ways and Means Committee markup process and drafted by the Senate Finance Committee, undoubtedly, they will tell you that they could have drafted it better.

Tax law experts are small in number but large in their self-reverence.

Here is the reality:  something must be done to stop the bleeding of our biggest companies to lower tax countries.  Voters don’t love big corporations and all too often see them as the last preserve of the very wealthy, but in reality, they employ most people in this country, either directly or indirectly.   Having our companies move their headquarters to Dublin or Dubai from Detroit or Des Moines does not work out well for the average American worker.

Reducing the corporate rate is the most important element of this package.  It might not make America great again (America is already great) but it will make America a great place to do business.

Our tax code is complicated and both the House and Senate are realistic in their approach to that basic fact.  There is a great impulse to take a mighty sword and slay the beast that is our tax system, but that can be counter-productive and turn out to be unfair.  So instead, both the Ways and Means Committee and Finance Committees have taken steps to make it a hell of a lot easier for most Americans to file their taxes and get something in return (a refund) while taking a surgical knife to complex issues like the international tax system and the issue of pass-throughs.

The small business sector belatedly climbed on board to the reform train after both Chambers took steps to make it easier for them to open new businesses and get relief from the oppressive rates that often snuff out start-ups in their infancy.   This is a work in progress and both chambers take a different approach, but because I have faith in the folks doing the negotiating, I think it will work out.

I hope that as they move through this process  the negotiators appreciate their biggest vulnerabilities.  One of the biggest is the House’s effort to eliminate once and for all the death tax.  Having worked in the House and having an appreciation for how viscerally conservatives hate inheritance taxes, just let me say that this is a loser for the GOP.  The distribution tables are terrible.

According to the Joint Economic Committee, only slightly more than 5,000 families have estates that are big enough to be taxable under current law.   Those are some pretty wealthy people who have enough resources to figure out a way around paying those taxes.  We don’t have to fall on our rhetorical and political sword for the one percent of one percent.  And that money could be used to help expand the child tax credit for middle-income people.

On the individual side, most people who make a million dollars aren’t going make out in this tax reform deal.  That, of course, leads to a lot of grumbling and maybe a bit of anger.  How dare you cut taxes for them and not for me?   Well, that’s another realistic feature of this worthy effort.  The rich might think they need a tax cut, but they don’t need it nearly as much as a family of four that brings in $50,000 a year.  For the wealthy, a thousand dollar tax cut is a rounding error.  For the working class, it’s new shoes, Christmas presents and maybe a nice meal out or a mortgage payment.  In other words, the working class can use the cash.

I have faith in the tax code writers, especially at the staff level, because I know that they have been working at this a long, long time.  Many of them were involved in putting together Dave Camp’s iconic tax reform draft.  Others were involved in the Baucus efforts on the Senate side.

I know they have been working on drafting some of this language for 7 to 8 months.  There were countless working groups, countless hearings, countless meetings with interest groups from all over the political spectrum.

Many of the professional tax policy writers would have preferred to have had bipartisan support for tax reform and have drafted this package accordingly.  But the reality is that Democrats don’t want to give President Trump a victory and really don’t want to implement policies that get the economy moving again.  Why give Trump a lifeline, they reason.

So Republicans will have to prove they can govern by getting the votes themselves.   And they are doing it with a realistic reform bill that will grow the economy, increase wages and make America a great place to do business again.