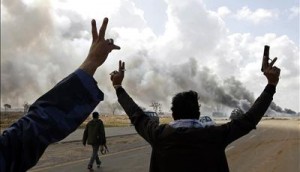 Rebel fighters gesture in front of a burning vehicle belonging to forces loyal to Libyan leader Muammar Gaddafi after an air strike by coalition forces along a road between Benghazi and Ajdabiyah.

The question that pops up in my mind is: “Go where?”

I don’t think our President has an answer for that question. I think the President is winging it.

They forgot one crucial group, though: the Congress.

It seems to me that making sure that the folks who are paying the bills would be clued into this latest foray into the Arab world.

The Obama Administration is taking the position that Dick Cheney took in the run-up to the first Gulf War: it doesn’t need Congressional authorization.

But the first President Bush rejected Cheney’s advice and sought Congress’s stamp of approval before launching Operation Desert Storm in 1991.

Right now, I don’t see any evidence that Obama has thought through this military adventure.

Loose talk from Mr. Obama has made the situation worse. Remember, he was the one who said: "Across the board we are slowly tightening the noose on Gaddafi,” just as Gaddafi was piling up victory after victory in his war against the rebels.

When a President makes statements that are clearly at odds with reality, it is natural that his Administration will try to take steps to square the circle. After all, Mr. Obama’s credibility is on the line.

But we shouldn’t be involving ourselves in this fight merely to protect Obama’s credibility.

I am uncomfortable with what we are doing in Libya. I think it is the product of loose talk and a loose process. I hope the President tightens up his rhetoric and shares with the American people his strategy so that we have a better sense of where he is taking this country. If we are involving ourselves in another war, the President ought to let us in on the secret.