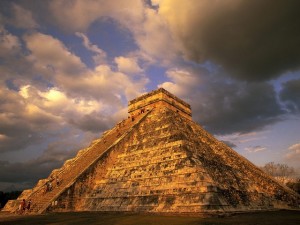 Somebody in the White House had the presence of mind to tell the President that perhaps taking the kids to visit the Mayan Ruins may not have been the best thing to do when he has just ordered our Air Force to start bombing Libya.

The truly fascinating question is what took him so long to make that decision?

The President’s trip to South America has been billed as a trade mission. And of course, trade is an important part of any strategy to boost our economy. Unless, of course, you are part of the union leadership, which has desperately tried to sink all trade agreements, including ones with Colombia and Panama. And by the way, the unions happen to be to biggest supporters of this President.

The Mayan civilization collapsed, scholars say, in either the 8th or 9th century. One theory holds that the reason for its decline was the collapse of trade routes, which would make the President’s visit somewhat germane in that our economy will collapse if we don’t keep trading. But that’s a pretty big stretch in the best of circumstances.

The Mayan civilization has been on the minds of many people lately. According to the Mayan Calendar, the world is slated for extinction next year. That may be why the President is not moving forward on Social Security reform. If we are all doomed anyway, what’s the point?

ABC news reports, however, that the calculations might be off a bit. “The much-hyped "prediction" that, according to the ancient Mayan calendar, the world will end on Dec. 21, 2012, may be based on a miscalculation. According to recent research, the mythological date of the "end of days" may be off by 50 to 100 years.”

Now, the big question: What about Social Security?

If it is 50 years, we probably don’t have to worry about fixing the program. 100 years? Well, that is when it gets complicated.

Perhaps the President was trying to gain greater inspiration from the Mayans and trying to get some answers to those big questions. Maybe that is why he was so reluctant to cancel his vacation.

But back here in the real world, that’s not really a good enough explanation.

I am not one to criticize the President for making important trips around the globe. That is a big part of the job. And if he wants to bring the kids, well, that is fine with me, as long as they don’t miss too much school.

But the President has committed our troops to help secure a “no-fly” zone in Libya against a dangerous and diabolical dictator. This is not a trivial step. It costs lots of money and it could put Americans in danger.

Mr. Obama has yet to explain his decision to the American people or to have a formal meeting with Congressional leaders to lay out his vision and his strategy.

He made the right decision to cancel his visit to the Mayan Ruins, but I still wonder what took him so long.