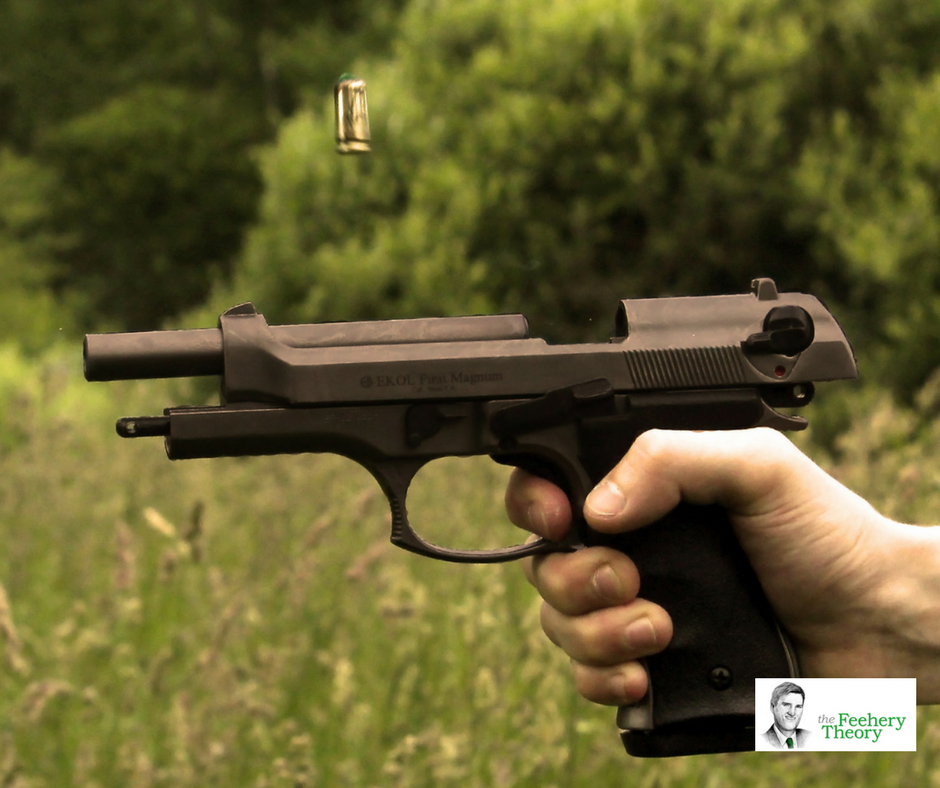 He put a tax on gunpowder as a way to get those damn colonists under control.  In fact, that was one of the leading causes of the fracas up at Lexington and Concord.

It helped to spark an insurrection, which led to a revolution.

The Founding Fathers were always clear on this point.  Thomas Jefferson put it succinctly:  “the tree of liberty must be refreshed from time to time with the blood of patriots and tyrants.”

America’s frontier spirit has thusly tread lightly on the whole subject of gun control.  The first gun groups rose up in Kentucky in the 1830’s, after politicians there tried to make it more difficult for citizens to conceal carry, leading to a Supreme Court decision that clarified that the right to bear arms was not reserved solely for state militias.  Individuals had the right to keep guns nearby, just in case a bear, an intruder or a tyrant came knocking on the door.

After the Civil War, as Republicans struggled to reconstruct a broken country, and they set about offering significant changes to the Constitution, the Fourteenth Amendment chief among them.  That is most famous for giving all citizens, regardless of race, equal protection under the law.  That included giving black citizens access to firearms so that they could protect themselves from white southern racists.

But gun control was not an unfamiliar concept as America progressed.  In Western towns, it was common practice to require cowboys to check their guns in with the local sheriff, to insure that too much partying wouldn’t devolve into a Saturday night gunfight.

The National Rifle Association was founded by two Northern Civil War generals who were concerned that during the war, the northern troops couldn’t shoot as well as the rebels from south of the Mason Dixon line.

Early on, the charge was teaching Americans how to shoot accurately.  And during most of its history, the NRA was not primarily a gun rights group, but rather a gun safety and training organization.

The NRA, for example, endorsed and helped design legislation signed into law by Franklin Delano Roosevelt in 1934 and 1938 that banned machine guns and sawed-off shot guns.

As Steven Rosenfeld in Salon wrote,

“...the NRA President at the time, Karl T. Frederick, a 1920 Olympic gold-medal winner for marksmanship who became a lawyer, praised the new state gun controls in Congress. “I have never believed in the general practice of carrying weapons,” he testified before the 1938 law was passed. “I do not believe in the general promiscuous toting of guns. I think it should be sharply restricted and only under licenses.”

Further gun-control efforts were undertaken in the tumultuous 1960’s, after Jack Kennedy, Bobby Kennedy and Martin Luther King were gunned down by assassins.  The National Rifle Association backed those efforts too, although the organization was starting to lose its appetite for more efforts to control gun ownership.  Back in that decade, the group that was most opposed to gun control was the Black Panthers, who saw it as an effort to take guns away from them.

Violent crime rose dramatically in the following decades, and more and more white Americans viewed gun control unfavorably.  They wanted protection from criminals and steadily lost faith in law enforcement to stop them.

This culminated in spectacular fashion when a New Yorker Bernie Goetz shot four would-be muggers on the subway after they tried to rob him.  Goetz became a folk hero for those who were sick and tired of the violent crime that became all too familiar.

Stopping gun control measures was not necessarily solely a partisan exercise.  In the days following the Columbine shooting, House Speaker Denny Hastert and the iconic conservative Chairman of the Judiciary Committee Henry Hyde, attempted to pass stricter laws to keep guns out of the hands of mass murderers.  Their efforts were derailed by John Dingell and a group of Southern Democrats who had the full backing of the National Rifle Association.

Harry Reid, the former Senate Democratic Leader, was endorsed by the NRA for close to twenty years, and consistently voted with the organization to stop efforts to ban assault weapons.  During the Obama years, that position became untenable for him and he switched sides in dramatic fashion, but not dramatic enough to help him pass any further gun control measures.

It has been a relatively recent phenomena that the NRA has been so closely associated with the Republican Party and similarly that it has been so reflexively against any measures to limit gun ownership.

Both of those are dangerous developments for both the NRA and for the GOP, especially in the context of the Las Vegas shooting.  For NRA, they were more powerful when they were bipartisan.  For the GOP, they are more popular with voters when take common-sense measures to protect them from crazy people and terrorists.

The thing that is most mystifying is Paddock’s motive.  If he is an ISIS soldier who was carrying out an attack similar to those in France and in England, we need to know what we could have done to mitigate the damage.  Did he come up on any watch lists?  Was he in contact with any agents of the Islamic State?  Was there any evidence that was overlooked, any dots that were not connected?

But what if he was just a guy who flipped his lid and decided to take out revenge against the casino industry?  What can policy makers and security experts do to stop other middle aged white dudes from killing a bunch of people for no apparent reason?

And what gun control measures, other than getting rid of all guns -- which seems highly unlikely, given the centrality of guns to our culture -- can Congress safely pass and the President would safely sign?

Can it pass a ban on bump-stocks, which were approved by the Obama which make it easier for semi-automatic weapons to shoot like fully automatic weapons? Can it pass a better tracking device of how many weapons that one person can buy so that another crazy white dude can stockpile a whole bevy of weapons more fit for a militia?   Can it strictly limit the number of bullets that each consumer can purchase, a modern version of King George’s tax on gunpowder?

I don’t know what it can or can’t do.  But it should try to do something.  Americans are tired of their fellow innocent citizens getting senselessly slaughtered and eventually they will vote for political leaders who prove they can do something to protect them.