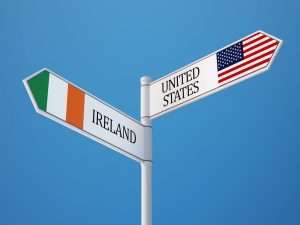 My grandfather (on my Dad’s side) voted against FDR four times. But as an Irish American, he was an anomaly. My mother’s side of the family was much more typical. They saw FDR and the Democratic Party in general as being in their corner and as a result, they routinely voted for Democrats up and down the ballot.

Chicago, where I am from, has been run by Democrats for generations, and for most of that time, it was run by Irish Democrats. The same was true for Boston, and to a lesser extent, New York.

It was in the 1884 election when the Republicans ran against “rum, Romanism and ruin,” a signal to the millions of Irish Catholics who had just emigrated to America that the Democrats were the most welcoming of the two political parties.

When the Irish first came to America, they had found that they had a talent for political organizing, especially in the big cities, usually centered around the local pub.

The first Irish Catholic to run for president was Al Smith, a New York Democrat. He lost in a landslide but consolidated the Catholic vote (except for my grandfather) within the Democratic Party for a generation.

John Kennedy, of course, was the first Irish Catholic to win the White House, and he too consolidated that crucial block for the Democrats, as 80 percent of them voted for the Massachusetts senator.

But since JFK’s election, the Democratic stranglehold of the Irish Catholic vote has steadily loosened. As the cultural wars engulfed America, more and more of the Irish found themselves leaving the left and embracing the conservative party. Ronald Reagan helped to make being Irish and Republican acceptable, if not preferable. In the 2004 election, where Irish Catholic Sen. John Kerry (D-Mass.) ran against evangelical Protestant George W. Bush, it was the Protestant Bush who carried the majority of the Catholic vote.

Barack Obama saw the usefulness of the Irish vote when he put Sen. Joe Biden (D-Del.) on the ticket and that helped him to stop the steady erosion of the Catholic vote from the Democrats to the Republicans.

But Rep. Joseph Crowley’s (D-N.Y.) loss in a primary election last month shows the new reality of our political parties. These days, the Irish, who helped to build a lasting majority for the Democrats for the bulk of the 20th century, are no longer welcomed in the progressive movement. When it comes to winning nominations, the Irish need not apply.

And he is not the only one who faces a stiff primary challenge because of his Irish heritage. Both Reps. Richard Neal and Stephen Lynch, both of Massachusetts, face similar threats for the same reason. Their Irish Catholicism isn’t the political asset it used to be.

The Democratic Party has becoming increasingly antagonistic to the Catholic Church and to practicing Catholics in general. The dogma runs deep in too many to make leading Democrats comfortable, especially those who might be named to the Supreme Court by a Trump administration that has not only courted the Catholic vote but has Irish Catholics in significant positions of power in the White House and in the executive branch.

The Irish need not apply. That seems to be the new and troubling mantra of the Democratic Party.