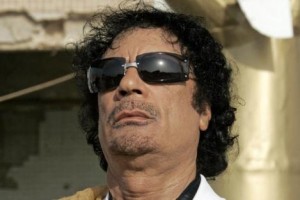 If and when Muammar Gaddafi is finally deposed in Libya, President Obama probably deserves some credit. He backed Nicholas Sarkozy and NATO’s efforts to aid the rebels (whoever they are). He authorized the Navy and the Air Force to bomb the hell out of the bad guys. And of course, he has been boldly predicting that Gaddafi’s days are numbered, a nice counter-balance to the Libyan dictator’s assurances that he was going nowhere.

Will Obama get that credit?  Probably not.

Most Americans don’t care what happens to Mr. Gaddafi.  They are worried less about the economic future of Tripoli and more worried about jobs in their own community.   Why should we spend our hard-earned tax dollars deposing a far-away dictator when we have a huge budget deficit and a struggling economy back here?

For the conspiracy theorists out there, there is a persistent rumor that we went into Libya to bailout Goldman Sachs.

Goldman lost 98% of Libya’s Sovereign Wealth Fund in 2007 (which amounted to $1.3 billion, a lot of it personal Gaddafi money, undoubtedly), and the Libyans were not very happy about it.  Goldman could never come up with a solution to this problem that could make the dictator happy.

Here is an excerpt from a story from the Wall Street Journal about the relationship between Goldman and Gaddafi:

"When they arrived in Tripoli that July, the Goldman partners got a warm greeting from senior fund officials and a cadre of inexperienced employees who hoped to make the fund one of the largest of its kind in the world. Goldman's team included its head of fixed-income sales in Europe and its executive in charge of clients in northern Africa.

To the Libyans, though, the main attraction was Driss Ben-Brahim, Goldman's Arabic-speaking emerging-markets trading chief, who ran one of its most profitable trading desks and was rumored to be among its highest-paid employees.

"We were in awe of Driss," one former Libyan Investment Authority executive recalls.

"He was like a rock star…while we were making peanuts. We felt honored by his presence."

Goldman subsequently offered the Libyans the opportunity to invest $350 million in two funds run by Goldman's asset-management unit, according to people involved in the transactions. Access to the funds usually is offered only to the firm's best clients, along with Goldman partners. The Libyans accepted.

Youssef Kabbaj, the Goldman executive in charge of North Africa, became a frequent presence at the Libyan Investment Authority as the investment bank worked to expand the relationship. He worked with the fund's management on investment ideas and encouraged younger employees to deepen their financial knowledge by attending Goldman training sessions, these people said.

Goldman soon carved out a new business with the Libyans, in options—investments that give buyers the right to purchase stocks, currencies or other assets on a future date at stipulated prices. Between January and June 2008, the Libyan fund paid $1.3 billion for options on a basket of currencies and on six stocks: Citigroup Inc., Italian bank UniCredit SpA, Spanish bank Banco Santander, German insurance giant Allianz, French energy company Électricité de France and Italian energy company Eni SpA. The fund stood to reap gains if prices of the underlying stocks or currencies rose above the stipulated levels.

But that fall, the credit crisis hit with a vengeance as Lehman Brothers failed and banks all over the world faced financial crises. The $1.3 billion of option investments were hit especially hard. The underlying securities plunged in value and all of the trades lost money, according to an internal Goldman memo reviewed by the Journal. The memo said the investments were worth just $25.1 million as of February 2010—a decline of 98%.

Officials at the sovereign-wealth fund accused Goldman of misrepresenting the investment deals and making trades without proper authorization, according to people familiar with the situation. In July 2008, Mr. Zarti, the fund's deputy chairman, summoned Mr. Kabbaj, Goldman's North Africa chief, to a meeting with the fund's legal and compliance staff, according to Libyan Investment Authority emails reviewed by the Journal.

One person who attended the meeting says Mr. Zarti was "like a raging bull," cursing and threatening Mr. Kabbaj and another Goldman employee. Goldman arranged for security to protect the employees until they left Libya the next day, according to people familiar with the matter.”

If  Zarti was a raging bull, imagine how mad Gaddafi (who was mad in a different sense) would have been.

Of course, we don’t go to war to bail out our big investment banks, right?

That is way too cynical.  But questions do arise as to why we were so adamant to get rid of Gaddafi and much less adamant about getting rid of Assad in Syria.  Both are killing their own people to stay in power.  Libya actually was a better partner over the last couple of years in the war on terror than Syria.

Obama might see the downfall of Gaddafi as a big political winner for him, but I have my doubts.  It seems the only clear-cut beneficiary of this regime change was Goldman-Sachs.