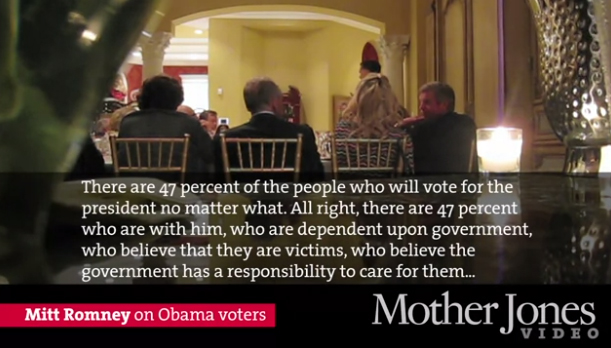 Mitt Romney may have a been a financial genius when he was a Bain Capitol, but as a politician, he is suffering from fuzzy math syndrome.  And if he wants to win this election, he better get his head on straight.

It is hard to spin his comments to a bunch of wealthy donors.  When he says that he doesn’t care about the 47% who don’t pay federal taxes, he is talking about a lot of Republicans voters.

As David Brooks pointed out in his column this morning, there are plenty of senior citizens who want to vote Republican who don’t pay any federal taxes.  These old people are dependent on the Federal government, especially Medicare and Social Security.  They don’t want the Romney-Ryan team to mess with these government programs, but they don’t want to vote for Barack Obama either.    Mr. Romney had better do a quick sell job to these folks in Florida or he is going to lose the election.

There are plenty of white voters who don’t make a lot of money and don’t pay a dime of taxes.  They don’t want to vote for Barack Obama either, because the Obama economy has been terrible for them.  But they are uncomfortable with a plutocrat like Romney.  When Romney says things like “I am not concerned about them,” he throws away votes.  Mr. Romney can’t afford to throw away votes.

There are plenty of people in the 53%, who probably aren’t going to vote for Romney, not matter what.  Limousine liberals, for example, pay plenty in taxes and they think they should pay more.  They live in Hollywood and New York, and ironically, Boston.  They are voting for Obama, not Romney.

Romney unfiltered is not a pretty picture.  Somebody better have a heart to heart with this guy and get his head on straight, or he is going to blow this election.