Obama is Not Working 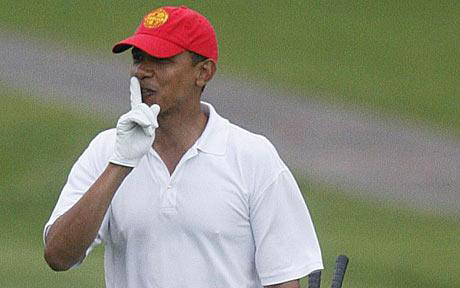 All hell is breaking out in the Middle East and in North Africa.

Israel is preparing to go to war with Iran.

China and Japan are at the brink of war.

Unemployment is above 8 percent.

The Federal Reserve is forced to buy forty billion dollars of mortgage-backed securities a month because the Chairman is very worried that the economy will backslide into a deep recession.

The debt numbers are only getting worse as the government grapples with adding a new entitlement to an already over-subscribed entitlement system.

The Obama Administration is failing on both the international and domestic stage.

And Mitt Romney is on the defensive!

How the hell does that happen?

But Mitt Romney and his team deserve some blame too.

Politico ran a story last night detailing infighting in the Romney campaign.  It had high-placed sources in Team Romney casting all sorts of blame on senior strategist Stu Stevens.

I am not close enough to the campaign to know all of ins of outs of the latest intrigue, and I don’t know who is at fault in the latest screw-ups with the Boston guys.

I also don’t care.  And I am highly annoyed that this story is coming out now, two months before the election.  It reminds me of the folks who threw Sarah Palin under the bus a couple of weeks before the 2008 election.

I am no fan of Sarah Palin, but I thought that was a very bad sign that the McCain folks had already given up on the election when they starting leaking that she was a prima donna who wasn’t fit to be Vice President.

The Romney campaign, from top to bottom, needs to understand that they can still win this election, but that it requires a team effort.  There is no “I” in team, people.

President Obama is not working.  He rarely works, unless you consider playing a lot of golf and campaigning work.  He hasn’t had a meeting with his jobs council in months.  He hasn’t met with his cabinet all year.  He hasn’t met with Congressional leaders all year.  Apparently, he gets up at 7:30 and goes to the gym before leisurely starting his day at 9.   He has skipped half of his intelligence briefings this year.  If 90% of success is just showing up, the President is not very successful.

The Romney campaign isn’t making progress on the “Obama is not working” theme.  It is hard to make much heads or tails out of what the Romney message is today.

That being said, this election is still very close.  Despite Romney’s lackluster effort, he can still win.  Despite the media spin, this race can only be called a toss-up.

The American people understand that Obama is not working.  They just wonder if Romney will.