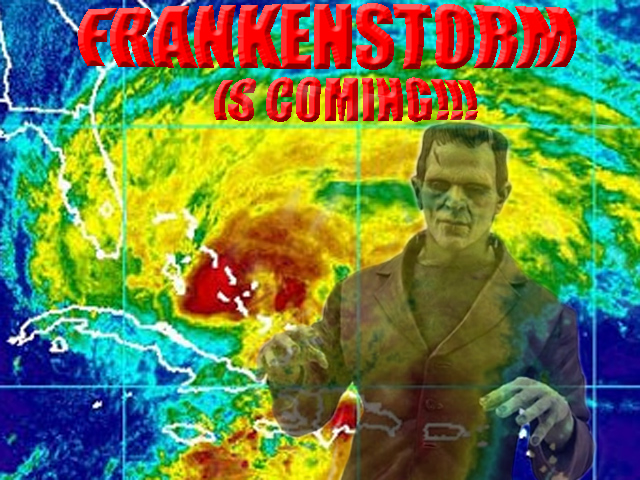 Contrary to media reports, Franken-Storm has nothing to do with Al Franken still being in the Senate.

Snowmagedden, last year’s big blizzard, was named in Washington.  I am sure of that.  Washington is not good at many things, but giving silly names to big weather events is one of them.

It all started with Watergate.  Watergate, of course, was the actual name of hotel before it became the biggest scandal of the 1970’s.   After that, everything that became a scandal had a gate added to the end of it.  Travel-gate, Trooper-gate, Iran-gate, etc.

Things get pretty silly in Washington, pretty quickly.  They especially get silly when you are stuck inside the house with a six-year old and a three week old.  The very idea of being stuck at home puts lie to the whole idea of telecommuting.  It is awfully hard to telecommute when you have a six-year old who is literally (to quote Joe Biden) bouncing off the walls.

I don’t know why everything has to be closed automatically at the first sign of rain.  Did the New York Stock Exchange have to close today and tomorrow?  Really?  This is the first time in a thousand years that the NYSE closed because of weather.  You  would think that the guys who work there would go to any length to get out of the house for a 8 solid hours, no matter how hard it is raining.  The gals too.  Yes, child care is hard to line up and for those folks who don’t have access to it, closing the schools can be a real pain in the butt.  But compared to being cooped for a day with a household of kids, it is probably worth it.

Washington pundits spend about three minutes wondering about the weather, and then they wonder about the impact of Franken-Storm on the election.   Yes, that about sums up the warped minds of the political elite.  Nice storm, how you going to vote?

I don’t know how this storm will impact the election, but here is my guess:  Not much.  Most people have decided how they are going to vote, and out of those people most will find a way to vote.

That will probably help Romney.  Most Romney voters are pretty motivated to fire Barack Obama.  I just don’t think Romney inspires the kind of panic among Democrats that Obama inspires among Republicans.

Mitt Romney is no Frankenstein.  Or Franken-storm as the case might be.