Thanks, Mr. President, For Proving the Case FOR Photo ID to Vote 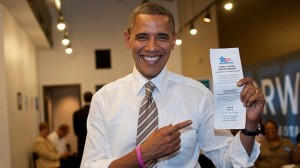 So this is pretty amusing.

For MONTHS, the very Obama-friendly MSNBC has been telling us that requiring photo ID can lead to disenfranchising black voters and that maximizing early voting is crucial because many black voters cannot make it to the polls on election day, but avail themselves of early voting.

The president was asked for his ID, promptly produced it, and was given his ballot. Piece of cake.

By electing to vote early, President Obama demonstrated how simple, easy, and patently fair it is to require photo ID for voting.

The views expressed on TheFeeheryTheory.com are Ken’s own and do not necessarily represent the views of NewsBusters.org/ the Media Research Center