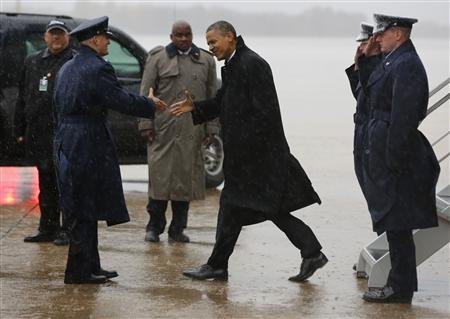 Christie has been getting a lot of good press lately over his handling of the biggest crisis to hit New Jersey since the Democrats ran the state into the ground a decade ago.

It’s no laughing matter.  And I am not trying to be funny.  Sandy was brutal and it will take the state a while to recover.

You have to give the Big Governor credit.  He told people to get the hell away from the beaches.  Some people didn’t listen, and now they are in trouble.

Christie made news by saying nice things about Barack Obama.

Obama is actually acting Presidential.  He called Mr. Christie several times to inquire about what he needs to help handle the crisis.  And he moved quickly to make those things happen.

It takes two to tango.  Unlike in Hurricane Katrina, where the Louisiana Governor had no clue what she needed or when she needed it, the New Jersey Governor had a list of things he needed.

Unlike the Louisiana Governor, who battled President Bush over who had jurisdiction over what, Mr. Christie didn’t give a hoot about jurisdiction.  He wanted results.

That Obama responded to Christie’s requests in a timely fashion is kind of what you expect from a President.  It is called being Presidential.  It is not rocket science.  And it requires some teamwork between the President and the nation’s Governors.

The guys getting the most press in response to the various disasters to hit the East Coast are Mayor Bloomberg and Governor Christie.  That is how it is supposed to work.  The executives closest to the problem should be the ones tasked with solving the problem.

Governors can call out the National Guard or mobilize Police and Fire Departments.  FEMA doesn’t do that.

The President’s FEMA guy, Craig Fugate, does a really good job because he understands the contours of the position and the responsibilities that come with rapid response.  President Bush’s guy didn’t do a very good job.  And that helped set the GOP back for a while.

I think Mitt Romney, the efficiency expert, would understand instinctively how to handle these crises.  He has dealt with these kinds of crises before, as a Governor and as the head of the Salt Lake City Olympics.

Romney the Governor welcomed FEMA when disaster hit Massachusetts, but he also was smart enough to take the leading role in disaster assistance.  That is what a strong leader does.  He takes the reigns when it is his job to take the reigns.

I am glad President Obama effectively responded to Governor Christie when the Governor needed help.

In this one instance, the President acted presidential.  It has been a long time in coming.