The Eternal Wisdom of Lou Loomis on #ComeyDay 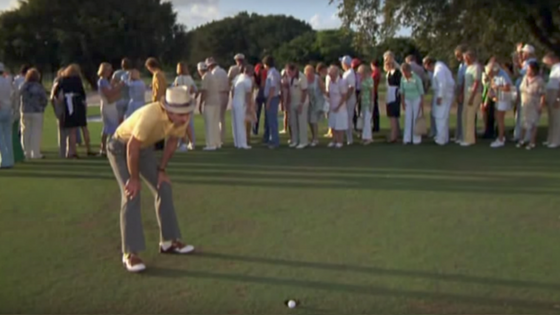 I feel like Lou Loomis today as James Comey testifies before the Senate Intelligence Committee.

Who is Lou Loomis, you ask?

Lou Loomis was the caddy master in the iconic movie “Caddyshack.”

Recall at the end of the movie.

Danny hits his putt. It stops short of the cup.

All hell breaks loose.  Bombs, set by Carl Spackler, (in a vain effort to kill the gopher) go off around course. Everybody loses their minds, getting caught up in the distraction.

But not Lou Loomis. Only he is keeping his eye on the ball.  He is the one who alerts the crowd as the ball goes in. Danny and his playing partner, Al Czervik (played by Rodney Dangerfield), win against Judge Smails.

Smails represents, the moneyed, corrupt, and morally bankrupt establishment. Czevik is not really that sympathetic, except when you compare him to Smails.

I feel like Lou Loomis, because I am not getting caught up in the distraction.

I am watching to see if the ball is going to go in the hole.

The ball, in this construct, the health care bill being put together by Mitch McConnell for Senate consideration.

Everybody assumes that McConnell’s putt will come up short. Richard Burr, who is chairing the Senate Intelligence Committee probe into Donald Trump and the Russians, said as much last week.

Trump, of course, is the quintessential Al Czervik.  Like Rodney Dangerfield, he gets no respect.

He is nouveau-riche, gauche, maladroit, and worse, he has offended the French.  Quel Dommage!

Trump doesn’t understand Washington conventions.  He is a simple caveman, asking the FBI Director to take it easy on his pal, Mikey Flynn.

The President hasn’t been trained in the ways of Washington, the misdirections, the leaks, the passive aggressiveness of a whole political class. They love you when you invite them to the White House, but they will stab you in the back as they pass by the Press Gallery on their way out the door.

One pundit once said about Mr. Trump that is the most honest politician we have ever seen in Washington.  He might say a lot of things that are factually wrong, but he speaks from the heart.

Of course, too much honesty is not always the best policy, my friends.

A weird collection of Democrats and #Never Trump conservatives are so offended by our friend the bellowing billionaire that they are doing their level best to escort him from the premises.

Never have so many people been so clear in their desire to impeach a President based on so little evidence. They wanted to impeach this guy before he even took the oath of office.

Some have made the accusation that this is worse than Watergate, including a former counsel who served on the Watergate investigative committee.  The animus is real.

All because Al Czervik told Judge Smails to take it easy on his friend, Mikey Flynn.

No, I am not calling Comey Smails. Take it easy folks.

If the McConnell putt does go in though, and if the House and Senate does pass a health care repeal and replace bill, all of the sudden, things look a lot different.

Passage of a health care bill in the Senate clears a pathway to tax reform, and possibly a budget and maybe infrastructure.

Maybe the Congress can take up immigration reform while they are at it next year.

But it all starts with the ball dropping in the cup.

That’s what I am watching for.

Be the ball, Danny.