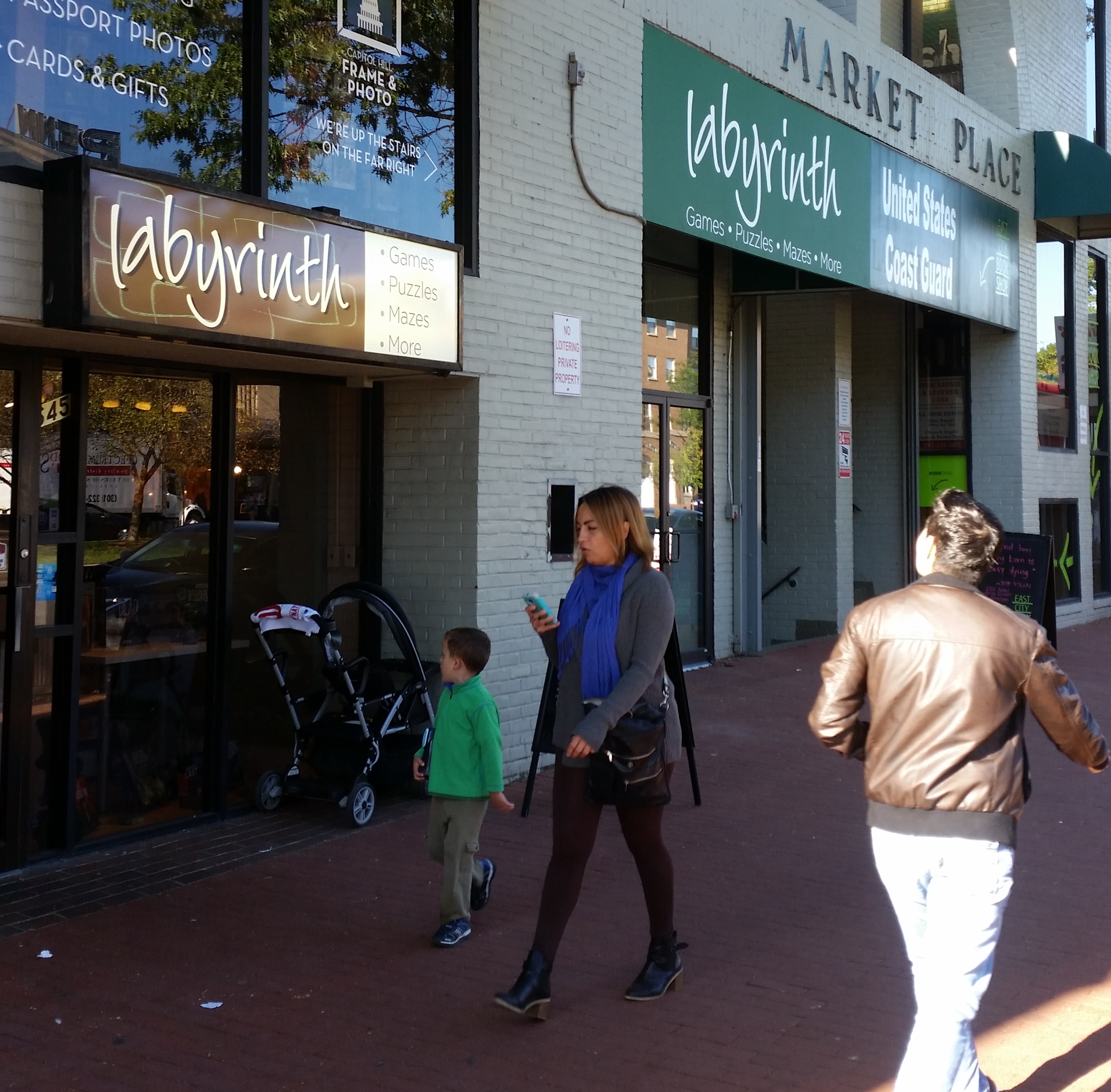 Adam Belmar: Well, it's good to be with you, John.

John Feehery: I offer theories, and my colleagues respond to them and offer their own. Like my blog the Feehery Theory, these theories are mostly about politics, but sometimes we stray off into other topics. We're coming to you from our worldwide headquarters near Eastern Market. We are either two or three floors above Labyrinth, a great game store for children. Adam, have your kids gone to Labyrinth yet?

Adam Belmar: Yeah, we've been down to Labyrinth John, and we're still exploring the area here. It is a great draw for families all over Eastern Market. I would also say for anybody who might be listening to the Feehery Theory podcast, that if you are a Star Wars fan, the collection of toys, and memorabilia, and other like materials at Labyrinth, very strong collection, you're going to want to check it out.

John Feehery: What is the game that Donald Trump is playing with James Comey? I will say this, this is the first theory, that this Comey thing is no big deal, it'll all blow over, he should have lost his job. The way the Trump administration fired James Comey though, was a complete disaster. You're a former journalist, you're also a former White House aide, what do you think about if Trump should have fired Comey and how he did it?

Adam Belmar: Well, I really don't feel like I have enough information to speak about the propriety of the decision to terminate the employment of the FBI director, but I do accept the fact that the president has that right. I also believe that because of the impulsive nature of this president, and the disconnectedness that occurs in the West Wing between the president and his senior aides, certainly those who are in charge of helping to communicate with the press and the world, this just fell into a big morass of nobody knew what was going on.

The statements that were being put out there by senior staff to press on morning shows and other places was completely disconnected from both the facts and what the president himself was thinking. We learned that both last night, John, when the president sat for an interview with NBC Nightly News anchor Lester Holt, and then when he decided to start tweeting this morning, making a Nixonian threat against the former FBI director, saying, "You better hope that there are no recordings of our conversations before you start to leak to the press." John, I am baffled at what is going on at 1600 Pennsylvania Avenue.

John Feehery: I will tell you that there's a great disconnect between Washington, DC that is really alarmed by this story. They think that this president is unhinged. The leaks from inside the White House are nothing that I've ever seen from any White House ever. They're vicious leaks, they're leaks against the president, they're also leaks against other staffers within the White House. This is not just the gang that can't shoot straight, this is the gang that has the knives out for themselves and their own team. They have to understand if they want to be successful, they've got to pull together.

Watching this though, outside the beltway, where you have the economy improving, we have the unemployment rate going down to historic levels, we have the labor participation rate going up, we have people feeling much more confidence about the economy, we have people who feel much more confident about the future of the economy, we have jobs that are coming, flooding in. We have people who are steel workers who are excited about going to work because they think Trump's got their back. In Washington, it's like, "This guy is going to destroy this country." What can you say about this disconnect, and about with your own kind of ... you've worked in the White Houses, you've worked in the media, what's your view of how this is all playing out, and the disconnect between Washington and the rest of the country?

Adam Belmar: Well, this is where I think I take exception with the first Feehery Theory, that this is a nothing burger that's going to blow over. I think if that were true, and I'll accept that it could still be true, that all of the compounded, self-inflicted errors are making it so much worse, and adding fuel to this fire, which is clearly burning now; that it's going to be hard to see that that's possible, that ultimately some sort of independent prosecutor or something that stands aside from the Senate, and its possible furtherance of the investigations already ongoing will take place.

To answer your question about the disconnect between the legislative priorities that so many people in our area of Washington are focused on, and this incendiary idea that we have an unhinged president who's going to take the country down somehow, I don't subscribe to that. I think the president is still new to his job, he's trying to do the best he can, and he needs to learn some self-restraint, and be a little bit more dignified in the way that he communicates. I'm not saying that he needs to change what he's thinking, just the way that he's reaching out and allowing people to have access to his thought train.

John Feehery: I think that's exactly right, I think the problem you have here, is all of this nonsense going on, and all self-inflicted by Trump. It is really hurting his legislative agenda. It also makes it easier for democrats to say, "I am not going to support this president on any of his legislative items, even if it helps the country, and helps my constituents, because we don't trust this president."

All right, moving ... let's go on to the second theory. The second theory is on healthcare. My theory is that the healthcare vote will not cost the GOP their majority in the House, but they better move quickly. If they don't on other items, and they better move quickly on improving the law in the Senate, because if they don't, this could be the beginning of something really bad for the House majority. What's your view of this? Do you think that this vote was ... we've had discussions about this offline, about how social media's exploded in opposition to this thing, it's one of the biggest things that ever happened, because people feel very strongly about their own healthcare. While they didn't like Obamacare, they also don't want to lose their healthcare. What's quickly, your thoughts on this healthcare vote?

Adam Belmar: Well, I tend to agree with this Feehery Theory. I don't think that what transpired in the House of Representatives as a make-good on the promise to repeal and replace Obamacare is going to take such a toll on the members that they would lose the control of the House just because of this. Having said that, the second part of this theory is that the Senate needs to follow up, and that this needs to continue to have momentum. Unfortunately, there's a huge disconnect.

I'm very wary that the narrative that's being promulgated by the left, that the republicans are disenfranchising so many people, and that parts of the policy here are so ill-considered, that they'll have a really bad effect both on quality of life and the economy. Those things are hard to disprove. They're easier to try and push forward as being true. We need to see the Senate take this up.

I do think that the republican majority in both Houses is challenged by the inability after eight years to move forward in a coordinated way. As the Senate takes its time, it's the greatest deliberative body on the Earth, there are some political ramifications that may yet blow back on the House because of it.

John Feehery: And it goes back to the idea of crowding out the rest of the agenda.

John Feehery: Especially when it comes to creating jobs, especially when it comes reforming the tax code, and getting economic growth. All right, last theory. Let's talk about Donald Trump's stock price. He's a businessman, let's talk about it in terms of stock. Would you buy, or would you sell Donald Trump stock? I'm of the opinion that it's undervalued, because the strong fundamentals in the economy. If you look at his numbers with the republican base, he's actually in a lot better shape than people want to give him credit for, especially in Washington. There's a lot of sellers out there, I'm a buyer, where are you?

Adam Belmar: You know what, if I were advising clients on this very interesting issue, I would say, "If you're in and you're leveraged, you hold at the moment." I'm not talking about dollar cost averaging, and buying while he's down, but I'm not selling, for sure. I think that there's huge upside potential for this president whose reputation and his stock, but I also think that the second quarter results are iffy at best, based on self-inflicted wounds, John.

John Feehery: Adam Belmar, thanks for joining us on this first podcast of the Feehery Theory, brought to you by EFB Advocacy. EFB.

John Feehery: Excellent For Business. Thank you very much.