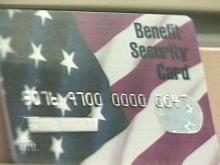 The Electronic Benefits Transfer Card is the identification card for the SNAP/Food stamp program.  It works like a credit card with a magnetic strip on the back that slides through a machine at a grocery store and some restaurants (including some fast food places).

Meant as a way to help reform the Food Stamp system in 2004, the EBT card is used in all 50 states and in the District of Columbia.  It has not been without some controversy.

In the State of Pennsylvania, for example, Democratic State Auditor Jack Wagner found wide-ranging fraud in the system, including one example where one EBT card holder withdrew close to $150,000 in $1,500 increments in one day.  Who knows what he (or she) did with the money.

The EBT has received some unwanted attention.  As one website put it:  “A new music video by R&B artist Chapter for her song “It’s Free Swipe Yo EBT” mocks black women on public assistance programs.  In her satirical video, Chapter plays Keywanda, a young mother of ten who deals with the “stress of her children’s fathers.” And according to the video, Keywanda lives with very few worries because she’s on several public assistance programs. Among other subjects, this song mostly takes aim at the Electronic Benefit Transfer (EBT) program and Section 8 vouchers, which make both food and housing available to parents.”

The video is hilarious if you are in a laughing mood, but it is no joke to those who are not in a good place emotionally.  Tea Party activists are likely to find this video further proof that the welfare system is morally bankrupt and must be abolished.  Black activists will likely find the message of the African-American singer to be inherently racist.

Chapter herself says that the video was meant to be thought provoking.  And it has provoked plenty of thoughts, especially on the Internet.  A Google search yielded more than 200,000 thousand conversations on the video, even though it was release just last week.

Welfare abuse is not just a black problem.  There are plenty of examples of millions of people of every color ripping off the system, gaming the unemployment program, taking money under the table, and skillfully getting themselves a job for just long enough  so they can qualify to get back on the unemployment system.

I was talking to one small business owner earlier this year about the employment situation.  He owned a small concrete making firm and he couldn’t find anybody who was born in America to do the hard backbreaking work to make his company successful.  So he hired immigrants, mostly new immigrants from Mexico.  They worked hard and they were glad to have a job.

Earlier this week, I was talking to a member of Congress who told me stories in his largely rural district of larger companies that were trying to hire people, but couldn’t find enough employees who could pass a drug test.  Plenty of people (and these were white people, for you racists out there) showed up when it was announced that the companies announced they were hiring, but half immediately dropped out of consideration when it was announced that drug tests would be mandatory.  Half of those who remained flunked the drug test, and half those who remained didn’t come back for a second day on the job.  Unemployment was just too comfortable.

We have made it awfully comfortable for many people to stay unemployed.  The welfare state isn’t ideal, but hey, it beats working.  That seems to be the general message. And the irony for Obama is that the longer he extends unemployment insurance, the higher the unemployment rate is going to remain, which means the likelier that Obama will lose re-election.

We need to right-size our incentives to encourage people to get back to work.  And we have to understand that a good number of people are going to game a system that is overly generous and doesn’t have the right carrots or sticks.

One example of a good incentive is require a drug test before anybody gets any welfare benefits.  We shouldn’t pay people to sit at home and smoke doobies.  It makes no sense.

The EBT video is funny.  I’m not sure if it is ha ha funny or the other kind of funny.