Obama and His Critics 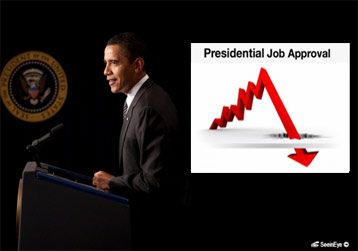 I was working out at the gym this morning (I know, miracles never cease), and I looked over briefly (I know, you don’t believe me), at the television and saw one of the hosts interviewing Rachel Maddow.

I am not the biggest Rachel Maddow fan in the world (ok, I am not really a fan at all) and I immediately assumed that the topic of conversation was on the President’s decision on “don’t ask, don’t tell”, an issue that apparently is important to the MSNBC host.

According to the headline blaring at the bottom of the television screen was “Is Obama losing his base?”

Interesting question, given that the previous day, the President struck a blow for some of his most passionate supporters by going through with change in a long standing military policy.

I will make this observation.

Let me explain.  The President’s policies are not working.  We are going broke spending money we don’t have on programs that don’t work.  The unemployment rate is still terrible.  Economic growth is terrible.  Consumer confidence is terrible.

The Obama Administration is going out of its way to destroy jobs with silly and stupid regulatory actions.  Obamacare scares the hell out of small business owners.  The NRLB is actively trying to stop the construction of a new airplane manufacturing plant in South Carolina.  The Obama Justice Department is closing down a Gibson Guitar manufacturing company because of a stupid EPA rule.

The liberal base is made up largely of three groups:  African American voters; women voters (in particular single women); rich people.

What has Obama done for these three groups?  Unemployment with black Americans is at record highs, a fact that Obama never talks about, ever.  A new book from Ron Susskind details how the Obama Administration really feels about the ladies.  And Obama spends every speech talking about how evil rich people are.

No wonder he is losing his base.

A new poll just came out that shows Sarah Palin is just 5 points behind Barack Obama if she chose to run for President.

Other polls show that just about any of the announced Republicans would beat Obama right now, including Ron Paul.

The President probably thinks that everything is going to be all right, and maybe that is true.  Maybe the economy will come storming back and maybe people will start listening to Mr. Obama, after largely tuning him out for the last year and a half.