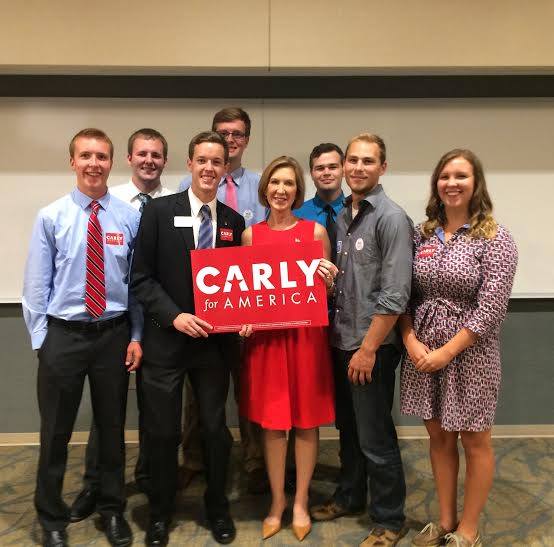 That was the line of the long debate night, but sadly, it was at the very beginning, before most Americans, including me, were watching.

Lindsey Graham, South Carolina’s Senior Senator, uttered those lines, talking about the necessity of a President to engage with the Congress in order to get things done.

He won the undercard match, easily outpacing his rivals, according to all of the analysts. Hopefully that will give him the chance to move to the big kids table in the next debate.

Winning the undercard worked for Carly Fiorina. It may be a coincidence that the former HP CEO is from California, but her win in the debate last night reminded me of the San Francisco Giants, who won the Wild Card to make it to the playoffs and then win the World Series last year.

It’s too early to pick Carly as our Presidential nominee, but she was so much better prepared, so much crisper, so much more passionate than any of the other candidates, that it would be stupid to count her out.

Marco Rubio came in second place last night, despite a lame joke about water at the beginning that struck the wrong chord to drought-afflicted Californians. He thoroughly schooled Donald Trump, not by attacking him with one-line quips, but by giving him a tutorial on foreign policy.

This was Trump’s jump-the-shark-moment. He looked clueless when it came to Syria, sexist in his encounters with Carly, hapless when talking any substance at all, classless when commenting about Rand Paul’s looks (which was weird), and woefully misinformed when talking vaccines with Dr. Carson.

Carson’s continued success in the polls remains a mystery. He seems like a very nice man. He came out against the War in Afghanistan, which is novel. Otherwise, he made no mark in the debate.

Remember Scott Walker? He jumped in early with his line on the apprentice, and then he faded into the woodwork, never to be heard from again.

John Kasich and Chris Christie were playing to a different primary crowd than Ted Cruz and Mike Huckabee. The two current governors were seeking to make the best impression on the independent voters who swing primary elections in New Hampshire. With Bernie Sanders looking like a shoo-in for the Democrats, I would expect a lot of independents to vote GOP this time around, which means that this is a solid strategy.

Cruz hates the Republican Party. He is running for those primary voters who similarly hate the GOP. His attacks on John Roberts were especially rich, given that he was his biggest supporter when W nominated him. W got some applause from the crowd when his brother Jeb forcefully defended him. Jeb’s biggest problem is his family, which is also his biggest asset. His statement that the only foreign policy advisors who are any good on the Republican side either worked for his dad or his brother only accentuated this dynamic.

Let’s face it. Jeb’s not a good debater. He has other strengths that his campaign needs to highlight. Debating is not among them.

This debate was both too long and had too many people. But it also wasn’t long enough and didn’t have enough people.

Lindsey Graham should make the cut next time. So should Rick Santorum, who came in second place in the last election.  That should count for something, shouldn't it?

But I don’t know how to make it all work. Maybe instead of debates, each candidate should be interviewed, live on camera, by Britt Hume, Fred Barnes, Paul Gigot and Peggy Noonan, for 20 minutes each, and then an audience votes on the top five candidates for the next debate.

By the end of the marathon last night, I needed that Graham drink, but by that time, it was too late, so I just went to bed.