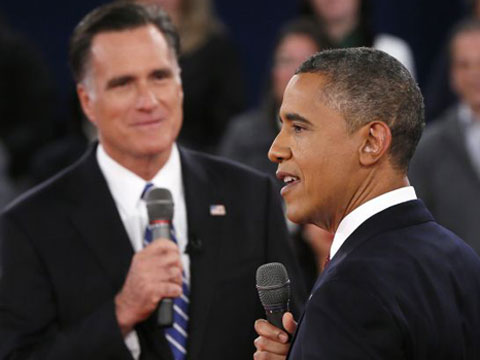 Naomi Wolf must have called Barack Obama and given her two cents about how the President could seem more macho in debate number 2.

He certainly was channeling his inner Al-Gore at the beginning of the “Thriller on Long Island,” when he moved aggressively into Mitt Romney’s personal space.

Romney followed suit, and at a few points, you thought that maybe something bad was going to happen.

It never did, but this debate showed the personal animosity that the President has for his opponent.

It is often said that the best defense is a good offense.  But in BHO’s case, he took this philosophy to a whole new level.   Instead of spending time defending his record or talking about what he would do in the next four years, he simply attacked Mitt Romney.   He stayed on a slash and burn offensive course.

That strategy will undoubtedly impress his political base.  The folks at MSNBC were over the moon, for example.  I don’t know how it plays with undecided voters, however.

Romney had a disciplined message:  The economy is sick, this fella over here doesn’t know what he is doing, I can fix it, give me a chance.  I think that message worked better than the President’s indictment of his elusive opponent.

Obama kept trying to turn the debate subject to abortion and contraception.  A key feature of Obamacare is the idea that every woman deserves free condoms and free birth control pills.

Mitt Romney doesn’t agree with that provision for a variety of reasons, the conscience clause being one of them.   But that doesn’t mean he wants to ban contraception.

But that is not how the Obama folks see it.  If you decide to stop giving away stuff for free, than you must be trying to ban it.   That is beauty of Obama socialistic-governing philosophy.   They give stuff away for free and they dare you stop giving it away for free.

Most of the questions were stacked in favor of Obama.  He got to prattle on about Lilly Leadbetter (a name on the tip of tongue of approximately three people in the world outside of Washington), but failed to point out that under the Obama economy, fewer women are working than were three years ago.

Who cares what the voters actually think, especially voters from Long Island?  New York is not a swing state.  Perhaps that is why the questions were so stacked against Romney.

It is no surprise that the Obama team rushed the spin room before the debate was over.  They have no choice.  They were going to do that no matter how he performed because he had to.  He could have declared “I am a Muslim,” and they still would have declared him the winner.

The media will declare the President the winner, as well, because they have no choice.  I don’t think the winner was that clear cut, and in my view, a tie goes to Romney.

This debate will do nothing to arrest the Romney momentum.