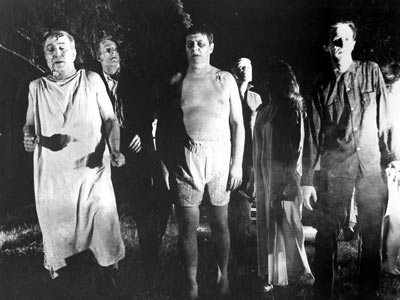 The Cubs have won the World Series.  Can the Zombie Apocalypse be far behind?

First, I want to congratulate my friends and the parts of my extended family who are Cub fans.

I am comforted by the fact that the White Sox won the World Series a full 11 years earlier.  So I've got that going for me.

We shouldn’t kid ourselves about the Apocalypse.  It’s already here.  And it has come in the form of zombies.

I am not talking about Trump voters, you silly people. I am a Trump voter.  (I know, the horror).

There was another story about a woman who live-texted her boyfriend as she was killing her son and threatening to kill her daughter.  They were both under the age of two.  The boyfriend didn’t bother to text her back.  They are both zombies.

My wife was doing some work in the extended suburbs of Philadelphia.  She had to go door to door.  Every third house seemed to be occupied by a Meth addict.  Those are Zombies.

A colleague of mine just concluded a bike trip that took him from Oregon through Northern California to San Diego.  He told me that the small towns in Northern California were scariest places he had ever visited, full of drug dealers and meth heads.

We are living in the Zombie Apocalypse.

We just don’t really know it yet.

There is a reason Kelly Ayotte and Rob Portman are doing so well in their races to win reelection.  Both identified how deeply the drug epidemic is destroying their local communities and they passed legislation that attacked the problem.

Their constituents appreciated the help.  It didn’t necessarily solve the problem but it was a start.

In my view, it will take more than a few drug treatment centers to battle the Zombie Apocalypse.

It will take a spiritual, moral and economic revival that inspires Americans to expect more from themselves and to be essential parts of their communities.

The Zombie Apocalypse has happened because there is no hope for many of these people.

They are tuned out and have turned themselves on with drugs.

Breakdown in our most affected communities happens because faith in the institutions that have traditionally bound us together has dropped to an all-time low.

People don’t believe in government anymore.  They don’t belong to churches.  They don’t have time to belong to civic institutions.  They watch too much television and don’t read enough books.  They are lonely and they drown their sorrows, first with beer, then with pot, and then with something stronger.

Economics, of course, play a role, and the economic determinists will blame the huge income gap as a reason why the poor are getting poorer.

But bad habits play a role too.  And bad decisions.

Most Cub fans don’t see the Zombie Apocalypse first hand.  They live on the North Side or in leafy suburbs or somewhere in Iowa or Peoria.

And I won’t make the case that there is a causal element here.   The Zombie Apocalypse started happening well before the Cubs won the World Series.