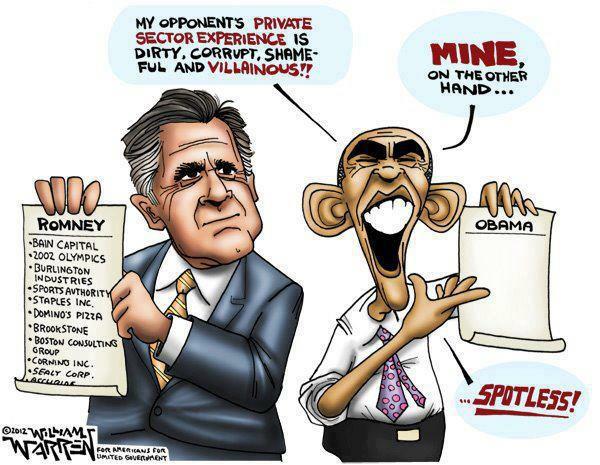 Originally published in The Hill

You never really get a chance to size up two candidates for office until they stand shoulder to shoulder on the stage.

Mitt Romney is about an inch taller than Barack Obama. Usually, the taller candidate wins elections in American politics.

They are a study in contrasts, Obama and Romney, but united in a singular purpose: They want to run the country.

Both Obama and Romney had fathers who played a critical role in their political development. Obama’s father, an intellectual from Africa, played the role of absentee dad, barely acknowledging the young Hawaiian’s existence. Romney’s father, a businessman who once lived in Mexico, almost won in his bid to become the first Mormon president.

Obama wrote a book called Dreams From My Father, while Romney is actually living out the dream from his father.

Romney’s father saved a car company called American Motors. A central theme in Obama’s campaign is that he saved the auto industry.

George Romney taught Mitt that if he wanted to be a politician, he needed to make a lot of money first. “Don’t be beholden to anybody,” he counseled his young son.

Obama got rich after he got involved in politics, chiefly from the book he wrote about his father.

But the Obama family learned that the political process itself could be a good way to make some money. After all, that’s the Chicago way.

Romney calls Boston home, although he wasn’t born there. As a result, he became a Red Sox fan (I think — he doesn’t talk much about the Red Sox). He started his business in Boston and decided to run for office in his adoptive home state by going against the iconic Boston family, the Kennedys. He didn’t win against Ted Kennedy, but when he became governor, he worked with him to pass his signature legislative accomplishment, RomneyCare.

Romney was raised and became a leader in the Church of Latter-day Saints, the mystery religion. Obama’s religion is a mystery. He says he is not a Muslim, and as Hillary Clinton once memorably said, I have no reason to doubt him. But he disowned the church in Chicago where he cut his political teeth because his pastor became politically radioactive.

Obama calls Chicago home, although he wasn’t born there either. Obama is a White Sox fan, which he talks about all the time. It is good politics for him, because one of his biggest political allies, former Mayor Richard Daley, is a big White Sox fan. Obama learned early on that being an ally of the Daley family is far more advantageous than being a foe. His top adviser, Valerie Jarrett, is a former deputy to “Da Mayor.” His former chief of staff is the brother of the former mayor. The connections run deep.

Romney ran away from his political experience during the primary campaign, which was unfortunate, because he had a pretty good track record as governor. He has focused almost exclusively on his business experience. Obama has tried to turn that business experience into a liability. How dare Romney succeed in making money?

Obama has tried to run away from his record as president. His legislative accomplishments are unpopular and his economic policies have been unsuccessful. For Obama, this race better not be a referendum on his record. If it is, he’s a goner.

One thing that they agree on is that they offer two wildly different views about America’s future. I guess that is what these debates are all about.