Obama the Campaigner; Romney the Governor 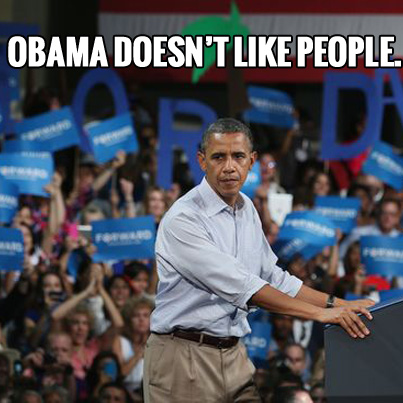 “Obama doesn’t like people.  In fact, he hates people.”

That is what a very prominent Democratic strategist told me the other day.

Obama doesn’t really like to deal with the people he is doing business with.   One Democratic Senator was bitching to my friend about Obama. “In the last six years, I have been to the Oval Office twice, and both times it was when Bush was President.  Obama never reaches out to me.”

If you have ever read any of Robert Caro’s books on Lyndon Baines Johnson, you know that is not how you govern.

Bob Woodward’s new book on the budget crisis shows an arrogant, uncompromising and ultimately unsuccessful President who was simply unable to negotiate in good faith.

The President hasn’t had a meeting of his Jobs Council all year, he has met with his cabinet maybe once, he hasn’t had a bipartisan leadership meeting all year.   In other words, he hasn’t done anything to provide the taxpayers with effective governance.

Thanks to the President’s ineffective leadership, we almost defaulted on our debt, we now have a fiscal cliff that is ready to sink our economy, and we have all hell breaking out in the Middle East.

But the President is a wonderful campaigner.  He gives great speeches.  His campaign team is top-notch.  They get the right pictures in the newspaper (mostly Obama with a beer in his hand).  The guy was born to campaign.

Mitt Romney, on the other hand, is a terrible campaigner.  Every single gaffe committed by the Romney campaign is a Romney gaffe.  His campaign commercials are flat.  He is not a natural stump speaker.  His convention speech (written chiefly by him) was fine, but not great.  He can’t help but bring attention to his great wealth.

But you get the sense, that if he became President, he would be a good one.

He is not a golfer, so he won’t break Obama’s record for golf should he get in the White House.

Romney is an effective executive.  He is also a numbers guy.  He will look at what the Federal Government spends and what it wastes, and he will be make solid recommendations about doing more with the taxpayer’s money.

Romney had to work with a Democratic-dominated legislature in Massachusetts and he got high marks for production.  He is generally seen as warm in person, and he seems to genuinely like people.

Romney also doesn’t strike me as cynical.  He is more like a Ward Cleaver type.  When he ventures into the world of political strategist, he makes jarringly stupid statements like his 47% comment, but the reason those comments are so jarring is because they don’t seem to fit with Romney.

Let’s hope the American people catch on to this fact.