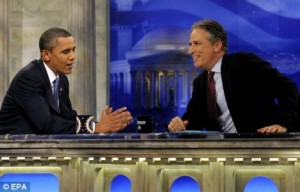 President Obama on The Daily Show with Jon Stewart recently.

He was a complete bore on The Daily Show with Jon Stewart, as he pontificated on how great his administration’s accomplishments have been and how he knew all along that this was going to be a tough election for Democrats.

Mr. Obama’s appearance on The Daily Show reminds one of John McCain’s appearance on Saturday Night Live the weekend before the Presidential election two years ago.  Except McCain was very funny.

Barack Obama is not funny.  Or at least he wasn’t in the time that I saw him on Stewart’s show.   After about ten minutes, I had to turn the show off.  BORING!

It is an open question whether the President’s appearance on The Daily Show was crossing a line, mixing the worlds of comedy and politics.

Stewart’s show is usually pretty funny.  He skewers the right (because he is a man of the left), but he skewers liberal politicians too.

The reason?  Because politicians make great targets for humor.

Court Jesters were the first comics to make fun of the political class.  And they were the only ones who could get away with making a meal out of the Royal Class.

Will Rogers was one of America’s first humorists to take on politicians, although as he put it:  “I don't make jokes. I just watch the government and report the facts."

Johnny Carson fine-tuned the art of making fun of politicians in his nightly monologues, and it is the Carson model that largely inspires Jay Leno and David Letterman today.

Barack Obama wasn’t the first President to appear on a comedy show in person.

Richard Nixon memorably made a cameo on “Laugh-In”, the risqué, counter-cultural, drug-addled comedy show.  Nixon’s appearance though was very funny, and very brief.  He looked into the camera and said “Sock it to me,” in such a way as to communicate that he got the joke.

Nixon’s “Sock it to me” moment was hilarious.  Obama’s appearances on The Daily Show, The Tonight Show and Late Night With David Letterman have not been that funny.

Instead of getting a President who is willing to be a straight man and poke fun at himself, we have been getting more lectures from the guy who wants people to know that he is the smartest guy in the room.  Boring.

Obviously, Mr. Obama is trying to score points with so-called young voters who apparently get their political information from Comedy Central.

But the President doesn’t seem to understand that young people watch The Daily Show (as do a lot of older people), because they want to be entertained.  They want to laugh.  They don’t really want to be lectured to, especially by a guy who is doing his best to pile more debt on their backs.

The Washington Post has an interesting op-ed by Alexandra Petra, “A Like-In For Generation I.”  In it she writes about the millennial’s love of irony:  “Call us Generation I.  I for irony, iPhones and Internet.  I for instant gratification.  I for idiosyncratic, inventive, impertinent.  We’re all of these things, and are our idols – The Onion, “The Colbert Report,” “The Daily Show.”  That is why we’re pouring onto the Mall on Saturday to celebrate the restoration of all things sane, sarcastic and Stewart…..(S)um up our lives in a phrase?   The important of Never Being Too Earnest.”

He should stick to doing his job and leave the humor to the politicians.