Columbus Day and the Garbage man 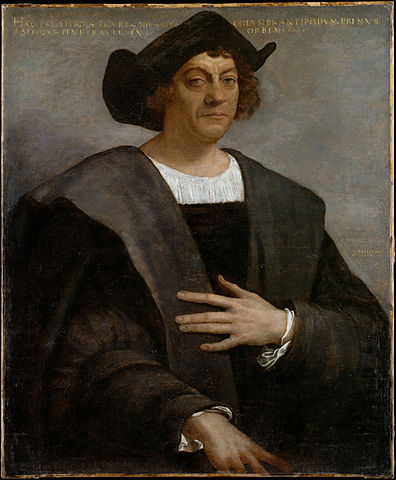 "Portrait of a Man, Said to be Christopher Columbus" by Sebastiano del Piombo - Metropolitan Museum of Art, online collection. Licensed under Public Domain

In my neighborhood, the garbage man comes on Mondays to pick up the trash, unless of course, it’s a holiday.

I woke up early, in a panic, because I hadn’t put garbage cans on the curb, thinking it was a holiday.

After all, it’s Columbus Day and our office is closed.

But here in the District of Columbia, it’s more than a bit confusing.

My son’s parochial school is also closed. You would think that a Catholic School would be more than happy to honor somebody like Christopher Columbus.

But the expensive private school in our neighborhood is opened. I guess the fancy people are more than a bit embarrassed by our nation’s history.   Honor Columbus, the man who opened the gateway for all of those brutal Europeans to come and subjugate the noble Native American tribes? How dare you even think of it!

Some people put the trash out on my block out and some people didn’t.

But I thought I would rather be safe than sorry.

So, I got up early and put out the trash.

Columbus Day, as a holiday, became an official Federal holiday in 1937, although it became especially popular to celebrate it on 1892, which was the 400th anniversary of the Italian Explorer’s first visit to the Caribbean.

Like everything in history, the Columbus Holiday is based on a series of historical inaccuracies.

The Italians like to celebrate because Columbus was Italian, but his trip was paid by the Spanish Monarchy.

He thought he was going to India on this voyage, and so he called the native people he encountered there Indians, which is the reason we call Native Americans Indians, when they aren’t Indian at all.

And Columbus never set foot in any territory in the United States, and he probably wasn’t the first European to set foot in North America, so it is kind of weird that we celebrate him here in this country.

But historical anomalies aside, we celebrate Columbus because he had the courage and the fortitude to cross the Ocean blue in 1492, brave hostile weather and hostile people, all in the pursuance of riches and fame.

Columbus wasn’t the perfect human being. But his entrepreneurial spirit has inspired countless Americans to pursue their own dreams, go outside their own comfort zone and dare to take huge risks.

Columbus did another very important thing. He exported Western civilization to North America. He brought European sensibility to the shores of this vast, unsettled and untamed continent.   He also brought modernity to a place that in many ways was still living in pre-historic conditions.

Some might like to believe that the noble Native Americans who we displaced had a more civilized and more nuanced approach to life. That might be, in a broad, philosophical sense, but in the more particular and more realistic world where most of us live, Western modernity was a necessary step in the advancement of world history.

Did Columbus, the Spanish Conquistadors and later the English settlers who came on the Mayflower commit more than their fair share of sins? Well, yes.

But on the whole, Western Civilization is a force that made the world what it is today.

Pope Francis, in his remarks to Congress, said about those first Europeans who came to America, “Those first contacts were often turbulent and violent, but it is difficult to judge the past by the criteria of the present.”

Francis came to Washington to canonize Junípero Serra as a Saint. Serra, who already has a statue in Statuary Hall in the nation’s Capital, made his reputation by converting native Americans to the Catholic religion.

In doing so, he taught them Western Civilization and in the process, he helps to bring modern thought to a region that needed it.

Many of those indigenous people now make up a huge voting block of Hispanic voters who will help decide the next election.

Without Christopher Columbus, it is hard to say whether there would be a Junípero Serra.   And without Serra, would California be what it is today?

History is a retelling of events that happened a long time ago. And each retelling mixes fact with more than a little fiction.

It’s important to understand both the fact and the fiction.

And Columbus Day is a perfect time to reflect on the people who made the United States what it is today, even if Columbus never actually set foot on our shores.

History has more than its fair share of garbage. And, as it turns out, the garbage men get the day off here in the District.