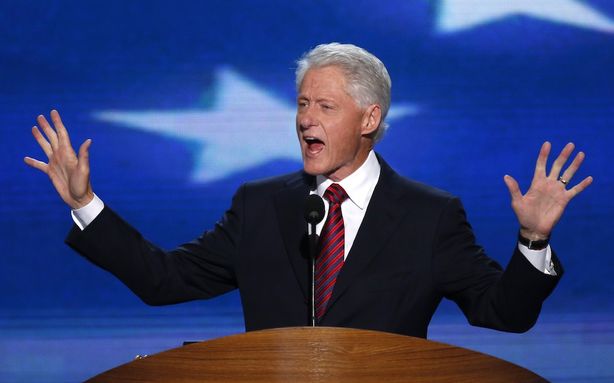 The truth is, if it were Bill Clinton running for reelection instead of Barack Obama, even he would have a hard time getting reelected.

I know that sound preposterous, but hear me out.

Clinton handily beat Bob Dole, who only got 40 percent of the vote, but he himself only got 49% of the vote.  If Ross Perot (the first Tea Party Presidential candidate) had not siphoned away 9 percent of libertarian/deficit hawk voters, they would have most likely voted for Dole had he not entered the race.

This was after Clinton triangulated against his liberal allies, signed welfare reform after vetoing twice, moderated the Democratic position on abortion, and otherwise did his level best to appeal to the Bubba caucus.

And keep in mind that during Clinton’s reelection, the economy was booming.   Unemployment was dropping like a stone, the tax revenues were flowing in because of the tech boom, the stock market was taking off like a rocket.

People felt good about the state of the economy.

Still, Bill Clinton only got 49 percent of the vote.  And had Ross Perot not been in the race, Bob Dole, who ran a lousy campaign with an even worse message, would have been very competitive with him.

Now, times have changed, as have the demographics of the country.  But they haven’t changed that much.

Sure, more Hispanics are voting, but the percentage of African-American voters has stayed relatively flat.  There are more Asians voting, but that voting bloc is completely up for grabs.

Would Bill Clinton have won if the unemployment rate were 8.2 percent instead of 5.4 percent?  I don’t think so, despite all of his tacking to the center, despite his signing of welfare reform, despite his Sister Souljah moment.

Barack Obama has done no tacking to the center.  His version of a Sister Souljah was calling the Boston cop stupid.  Sure, he signed an extension of the Bush tax cuts, but that did nothing to make him appear more moderate.  It just made him look weak.

And the unemployment rate is not getting any better.

Bill Clinton’s speech last night was long and self-indulgent.  It also belied what Clinton really thought of the Obama strategy.  Get thee to the middle, he seemed to implore his younger Presidential colleague.

Obama will have none of that.  For him, he would rather be a one-term President, doing the right thing (in his mind) than moving to the center.

Mr. Obama will get his wish.