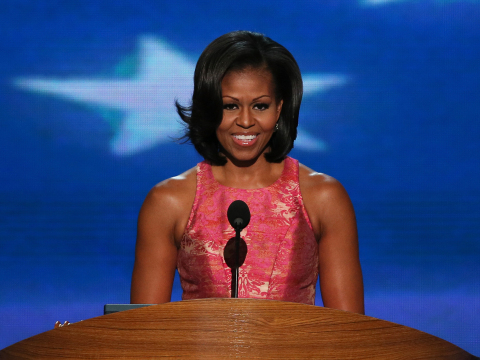 I caught the tail end of Michelle Obama’s speech to the Democratic National Convention.  The Nationals were trouncing the Cubs, and I had to watch that game, so it was only belatedly that I turned the channel to Fox to hear the last few minutes of her rousing address.

I didn’t catch any of Anne Romney’s speech last week, so don’t think I was in any way dissing Mrs. Obama.  From what I can tell, she really wants her husband to win, which is probably not that surprising.  I imagine being First Lady is a pretty cool job.

Eleanor Roosevelt was the first spouse of a President to speak to a convention.  In 1940, the Democratic Party was getting restless.  Europe was engulfed in war and FDR wanted to put Henry Wallace, a socialist if not an outright communist, on the ticket as his running mate.  FDR dispatched his wife to Chicago to calm the troops, and spent a good deal of her speaking time thanking party boss Jim Farley for being a good party boss.  She was no dummy.

The first Republican First Lady to speak was Pat Nixon in 1972.  Just as Dick Nixon’s campaign team was busily undermining the McGovern campaign with break-ins at the Watergate, Pat Nixon was electrifying the Miami crowd with a full-throated defense of her husband.

Interestingly, Barbara Bush was the first spouse of a candidate who was not already President to speak to Republican convention in 1988.  Apparently, George H.W. Bush needed the help.

The job of First Lady has evolved over the years, although there are examples of very powerful spouses from the very beginnings our nation’s history.  Dolly Madison had the presence of mind to save a portrait of George Washington when the British sacked the White House.  Edith Wilson basically ran the Executive Branch when her husband had a stroke.

Hillary Clinton promised to transform the First Lady’s job when she campaigned for the job in 1992, but she became so controversial, Team Clinton decided that she didn’t need to speak to gathered masses at the 1992 Democratic convention, held in Madison Square Garden.  She had made enough news when she said that she wasn’t the kind to stand by her man and bake cookies, a barbed reference to Barbara Bush.

These days, it is accepted wisdom that the spouse has to speak and speak eloquently at these party confabs.  In this ever-connected age, the First Family is such a presence in our living rooms, the whole family has to basically be interviewed by the American people.

Michelle Obama had a rocky start to her tenure as America’s First Lady when she hinted that she only started to have pride in America when it elected her husband as President.   But she has grown in the role, and now she is the most popular member of the Obama White House.

That being said, by and large, I don’t particularly care what spouses say about their husbands (or wives as the case will be in the future).  Yes, they love their husbands.  Yes, they are the best husbands in the history of the world.  Yes, they care for little children, old people, the family dog, and all of that other stuff.

What do you expect them to say?  My husband snores and he doesn’t pick up after himself, and he eats way too much crap?  Now that would be a great convention speech.  Sometimes, all the American people are really looking for is some reality.