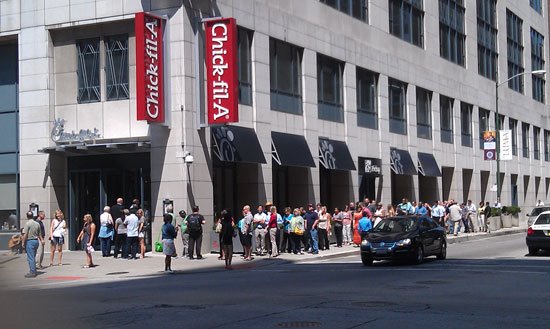 I was driving in Crystal City the other day, thinking that maybe I would stop at Chick–Fil-A, you know, to show my support for the freedom of speech.

I didn’t do it because the line stretched around the block.

Now, I know that the chicken sandwich tastes pretty damn good there, but I wasn’t going to wait in line a half -hour to get it.   But that sentiment wasn’t widely shared by the hundred people or so who were more than willing to wait in line.

He said that with no sense of irony, which is unfortunate.

If Chicago adopted some of the values of the folks at Chick-Fil-A, perhaps there would be fewer murders.  Chicago was recently crowned the deadliest Big City in the world.

It is hard to say.  But holding up Chicago values as some sort of paragon of great virtue seems to be a bit of stretch to me.

Before Rahm became the Chief of Staff to President Obama (which was before he became Mayor of Chicago), he ran the campaign committee for House Democrats.

Rahm’s role was to recruit candidates who didn’t necessarily agree with Nancy Pelosi on every issue, but would agree to vote her in as Speaker.  The Rahminator was very successful.

He helped to grow the Blue Dog Caucus because he didn’t really care what they believed.  Several of these members are still in Congress today.   In fact, more than a few of them owe their careers to Rahm Emanuel.

If I were running against Larry Kissell, Jim Matheson, Mike McIntyre, Mike Michaud, Ben Chandler or Jim Cooper, I would ask my opponent a simple question:

Do you have Chicago values, as promoted by Rahm Emanuel, or do you agree with the values of the hard-working folks who have helped to build Chick-Fil-A into the superior restaurant that it has become.

I am pretty sure the voters would be eager to find out the answer to these simple questions.