Can the Republicans Override A Presidential Veto on Iran? 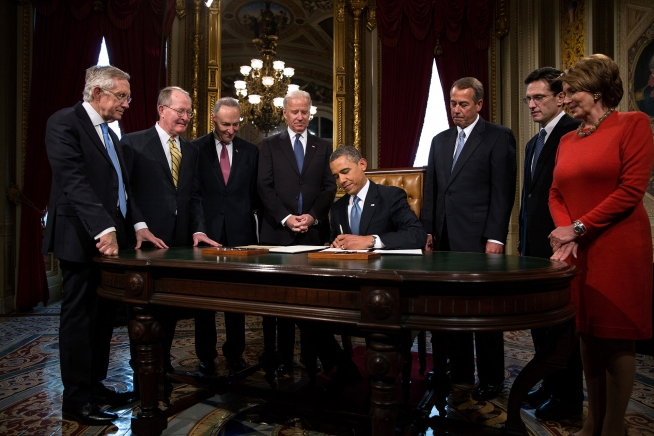 It’s easy for Republicans to oppose this nuclear deal with Iran.

They don’t trust President Barack Obama, they don’t like John Kerry, and they love Benjamin Netanyahu.

The question is: Can they override a presidential veto of a resolution of disapproval?

Congress can pass either a resolution of approval or disapproval regarding the agreement. A two-thirds vote in both chambers is needed to assert congressional dominance over the president, and to reach that threshold, Republicans will most likely need the support of the incoming Democratic leader of the Senate, Chuck Schumer.

Senate Majority Leader Mitch McConnell will need Mr. Schumer, all of the other Jewish Democrats in the Senate, and three other Democrats to join him in overcoming the veto that President Obama promised Tuesday in the face of congressional opposition. Sen. Robert Menendez is a likely suspect; Bill Nelson and Kirsten Gillibrand are also strong possibilities.

In the House, getting enough votes would be an even tougher slog. Iran is the one issue that unifies House Republicans. Indeed, when Speaker John Boehner invited the Israeli prime minister to address a joint session of Congress, it sent his stock sky-high among his most recalcitrant conservative colleagues. But the odds of getting enough bipartisan support for an overide are dicey at best.

There are 247 Republicans in the House. They need 290 members to override a veto, which means they would need 43 Democrats to abandon Mr. Obama.

It’s hard to see where they get that many votes. There are 18 Jewish Democrats in the House, and many of them will probably stick with the president. Neither the black caucus nor the Hispanic caucus is likely to abandon Mr. Obama, and it is highly unlikely that House Democratic leader Nancy Pelosi will either.

If Congress can’t disapprove of the deal, it becomes fodder for the 2016 presidential campaign. Hillary Clinton has already signaled her support. Sen. Bernie Sanders applauded this “victory for diplomacy.” Joe Biden obviously has to support it.

Among Republican presidential candidates, the general consensus is that the deal stinks. The question is how colorful their rhetoric will be to capture the support of big donors who also oppose the agreement. (Expect rhetoric along the lines of: Is this merely the worst deal in history or will it likely bring on the apocalypse?)

The president and his secretary of state finally have the deal they have worked so hard to make. Can they keep it? Time will tell.