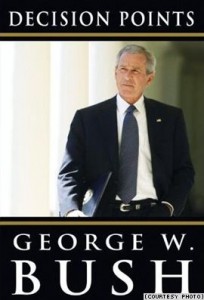 Let’s posit right now that George W. Bush loves his parents, his wife, his kids, his siblings, his Maker and America, and all of that love is a good thing, and helps to make him a good person.

You may think that the Bush Administration was the greatest 8 years in history or the worst debacle since the Harding tenure in the White House.  Either way, you have to give George W. Bush credit for being a good family man, a patriot and a good Christian.

That question was brought to the fore because he has a new book talking about his life as a politician.  I haven’t read the book yet, because well, it just came out today, but I hope to get to it someday soon.

I am thankful that Mr. Bush held off on his book tour until after the election, because, as I have said before to anybody who will listen that this midterm should not be about the former President, but about the current President.  Sticking his face on television right before the election might have confused the issue for a lot of voters.

That is not to say that Gorge W. Bush didn’t leave Barack Hussein Obama some real challenges.  The economy collapsed because of the financial crisis, we are engaged in two costly and unpaid-for wars, our debt situation is untenable and 10% cyclical unemployment threatens to turn into structural unemployment, all problems that started under Bush and have become immeasurably worse under Obama.

The Bush years, when measured through the prism of history, will be seen as a mixed bag.  Bush had some major domestic legislative accomplishments, including No Child Left Behind and the Medicare Modernization Act, which helped move the ball forward when it comes to education and health care in this country.  But these accomplishments are orphans, reviled by conservatives as expensive boondoggles and by liberals as insufficient investments in the future of the government.

Bush won’t be judged on those domestic achievements, however.  He was a war-time President and it is through the prism of war that Bush will ultimately be judged.

Although some kooks might try to blame GWB for the 9/11 attacks, just as earlier kooks tried to blame FDR for the Pearl Harbor attack, Bush’s war-time leadership really started immediately following the second plane hitting the World Trade Tower.

He had a shaky beginning, as Dick Cheney immediately sought to seize control as the President flew around the country in Air Force One, but eventually, he got his sea-legs, especially as he seized the microphone at the World Trade Center sight.  His decision to go to war in Afghanistan was logical, because it was there that Osama Bin Laden got support and refuge.  His later invasion into Iraq was a far more controversial and, in many ways, indefensible action.

Bush (and it must be added Colin Powell) were convinced by some elements of the intelligence apparatus, including the Vice President, that weapons of mass destruction were being built by Saddam Hussein, and that was entire justification for the war.  It was not a sufficient explanation to say, “whoops”, but that is pretty much what everybody associated with the war said when it was discovered that there were no such weapons.

Now, Hussein was a bad guy, an evil tyrant, and a sociopath to the nth degree.  But he was no fan of Osama Bin Laden, and all attempts to make the linkage were never proved and, in retrospect, were ridiculous.

When you are in the fog of war, sometimes you make decisions that are incorrect.  Invading the wrong country for the wrong reasons, however, goes beyond the fog of war excuse.

This is not to re-litigate the past, but history will judge Bush harshly for getting us into Iraq.  Will history judge him more harshly than it judges Lyndon Johnson for the Gulf of Tonkin, or McKinley for “Remember the Maine to Hell with Spain”?  Time will tell.

Bush’s courageous decision to authorize a “surge” in Iraq, which helped America ultimately win the war against the insurgents, on the other hand, will go down as one of his better ones.  Once you are in a war, you better win it, no matter how you got in it.  Historians judge winners far better than losers.

Peggy Noonan wrote in the Wall Street Journal about how the Tea Party rescued the Republican Party from the legacy of George Bush.  “The tea party rejected his administration’s spending, overreach and immigrations proposals, among other things, and become only too willing to say so.  In doing this, the tea party allowed the Republican establishment itself to get out from under Mr. Bush.”

It is an interesting point, but she fails the mention the centrality of the war to the Bush era.  Bush kept us safe after the attacks of 9/11, and that is no small feat.  He used every tool in his tool box, some that may not have passed constitutional muster, but that is for constitutional historians to decide.  That was his greatest triumph.

His greatest failure was that in refusing to pay for the war, and by expanding the size of government instead of contracting it during war-time, Bush put us on a path that will make it harder for us to maintain our military and financial supremacy for the long-term.  His unpopularity also ushered in the presidency of his successor, which has only accelerated this troubling trend.

I like George Bush and I supported him when he was President.  I have many close friends who worked for him and I did my fair share to help him when I worked for Speaker Hastert.

But that doesn’t mean that I can’t look at his Presidency with a fresh pair of eyes.  Mr. Bush, with his new book, is basically asking us to revisit his tenure.  Like most Presidents, Mr. Bush had his wins and his losses, and it is really up to the historians to decide whether he was a success or a failure.