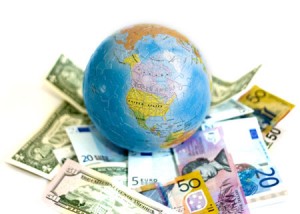 But that isn’t going to stop me from making a few observations about Mr. Bernanke’s latest moves to spur economic growth in this country.

Rarely can any policy maker infuriate the Chinese, the Germans and the Tea Party all at one time, but that is exactly what the Fed Chairman did when he announced he was going to start the process of “quantitative easing”, which in simple language means “printing more money.”

The Chinese are apoplectic. They see this as a strategic challenge to their own policy of making their own currency weaker than it ought to be. The Germans, who ditched the Deutsche Mark in favor of the Euro Dollar at the turn of the century, hate the idea of printing more money. They are still scarred from the turmoil surrounding the Weimar Republic’s currency, which helped lead to the rise of Adolph Hitler.

The Tea Party? Well, they too are worried about the dollar becoming less valuable. They don’t like the whole idea of the Federal Reserve, and channeling their inner-Andrew Jackson, they would simply do away with the central banking and return to the Gold Standard.

Ron Paul, the father of Rand Paul and in many ways the intellectual Godfather of the Tea Party movement, simply hates the Fed, has made countless speeches about returning to the Gold Standard, and actually was able to convince many of his colleagues on the left and right to pass legislation to bring the Fed to heel with an audit.

Bismarck once said that you never should watch closely the process of making sausages or laws, and my guess that if the Iron Chancellor had known about how the Fed does its job, he would have extended his admonition to it as well.

Bernanke is taking a big gamble because, as the world’s foremost historian of the Great Depression, he sees the number one problem facing the American economy as deflation and not inflation. He has ample evidence, since core inflation has dropped from 2.2% to 1.1% this year alone. Inflation is going to be a problem at some point. That point in time is not right now, though.

But if he is wrong and inflation is a threat right now, it is not going to be pretty around here.

The rest of the world used to rely on us to consume all of their exported stuff, whether we needed it or not, but we seem to be getting sick of consuming so much. The binge is over. Americans are finally paying down their debt and they aren’t spending as much on junk from China.

I don’t think lowering long-term interest rates are necessarily going to change that equation, but perhaps making the dollar less valuable will make our products much more attractive to the Chinese consumer, who historically doesn’t consume much at all.

Rebalancing the world’s economy means that the Chinese have to do their fair share of mindless consumption. And if making the dollar worth a little bit less is the price for getting 1.3 billion consumers in the heart of Asia to buy some American junk for a change, well, so be it.

Bernanke looks at the mess that currently is the Congress, and all he sees is gridlock and over-heated rhetoric. But he should be careful. While on most responsible things, the House and the Senate will likely do nothing of consequence, when it comes to doing something completely irresponsible, like politicizing the Federal Reserve, the Congress may act and act quickly.

Bernanke sees a power vacuum and has sought to fill it. The Congress sees a power grab from the Chairman and will likely seek to counter it.

In the meantime, while G. Gordon Liddy is hawking gold on the Fox News Channel, the stock market has been steadily climbing up for the last six months.

Liddy tells us that there is no better time to buy gold (of course, he has been saying that now for as long as Glen Beck has been on the air), but the market seems to tell us that equities are still a pretty good place to invest.

Bernanke says that we have to print more money, the Chinese say that we can’t do the same thing that they are doing, the Germans say that Bernanke is reckless, and Sarah Palin, the noted economics expert, calls on the Fed to “cease and desist.”

You can’t get this kind of drama on “Jersey Shore.” But maybe you can on Palin’s new reality television series on the Discovery Channel.