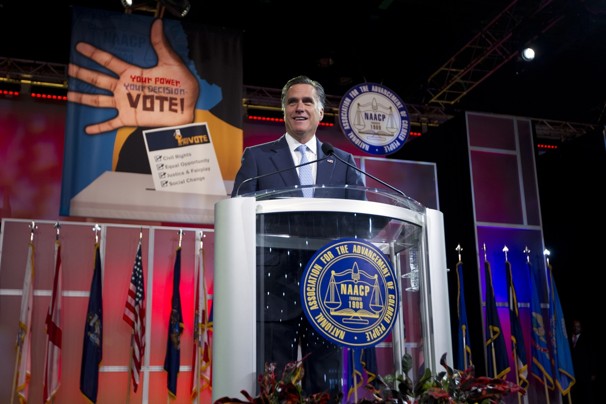 It was really no surprise that Mitt Romney got booed when he said that he would repeal Obamacare to the NAACP Convention.

It was as if Romney walked to home plate of Yankee Stadium and yelled to a full stadium, “Yankees suck!  Red Sox Rule!”

The media is giving credit to Romney for making an effort to reach out to African-American voters and are calling him courageous for sticking to his stump speech before the largely hostile crowd.

I’m not sure it is courageous, but I do think Romney did the right thing by making the effort.

The former Massachusetts Governor wants to portray himself as being consistent, which is the reason he decided to say the same thing to this group as he says to every group.  And being consistent is important.

But I also think it makes sense to tailor the message to the groups you are talking to.  You don’t have to be inconsistent, but you can emphasize some things and de-emphasize others depending on the situation.

It has been more than a bit challenging for the Republican Party to attract more than a pittance of African American voters over the last five decades.   Despite being the political party that ended slavery and pushed through civil rights legislation, Republicans haven’t done well with black voters.

The fact that Barack Obama is the first black President seemingly makes it even more difficult to get much support in the African American community.

But Republicans have to continue to try, even though it might seem to be a waste of time.  George W. Bush set back that cause when he refused to address the NAACP in his first 5 years as President.

Bush actually had a pretty good agenda that he could have talked about, too.

Unemployment among African Americans was much lower during the Bush years than it is now.  Bush pushed for groundbreaking education reform targeted mostly at failing schools in the inner city.  He pushed for prescription drug coverage in Medicare, which helped many African-American seniors get the life-saving drugs they needed.  He also continued empowerment zone tax policies that helped spur economic revitalization in many urban areas.

But Bush chose not to engage the NAACP because he figured that they weren’t going to vote for him anyway.  That was a dumb decision.

The black community is not monolithic, although African Americans tend to vote as if it were.

There is a thriving black middle class in many parts of the country.  They are just as concerned with taxes and spending and crime as their white neighbors.

Religious conservatives make up a healthy percentage of the black electorate, and their religious beliefs are not that much different from their co-religionists in other whiter congregations.

But some parts of the black community are under considerable economic and societal stress.  Gangs are ravaging the South Side of Chicago, and kids are killing kids at an alarming rate in too many urban communities.  Schools in many of these areas are horrible, and the family structure has largely collapsed.   The unemployment rate in these areas is astounding.

It is tempting to lump all African-Americans into the same group, tempting but stupid.  And for Republicans, they have to find ways to message to every part of the black community.  They have to acknowledge and appreciate the great strides made by the black middle class, they have to express solidarity with socially conservative African Americans, and they have to come up with a plan to fix those communities that are falling apart.

These are three different and distinct messages.

When I worked for Denny Hastert after he became Speaker, one of the first things he did was to tour the South Side of Chicago with Congressman Danny Davis to find out what he could do to help that ailing community.  Hastert worked with Davis and J.C. Watts to come up with an empowerment zone concept, first conceived by Jack Kemp.  Hastert later jointly unveiled this plan with President Clinton at a school in the South Side of Chicago.

The Speaker encountered some grumbling from conservatives about his New Markets initiative, but he pushed it through the House and eventually Trent Lott let it get through the Senate.  Hastert didn’t suddenly win votes on the South Side, but he did get some respect for trying.

But salutary neglect won’t work in the most devastated urban communities.  It requires attention, persistence, leadership and money.  Obama has provided a measure of inspiration, merely by being the first African American President.  But he hasn’t done much else.

That gives Romney an opening.  Not a big opening, but an opening nonetheless.

It is unlikely that Mr. Romney will win many votes in the black community as he runs for election this time around.  But if he has a plan to ease the burden on the black middle class, a plan to ease the fears of black social conservatives, and most importantly a detailed plan to restore order and hope among the black underclass, he could position himself to get a substantial number of votes in the African-American community when he runs for re-election in four years.