Bill Buckley: Now More Than Ever 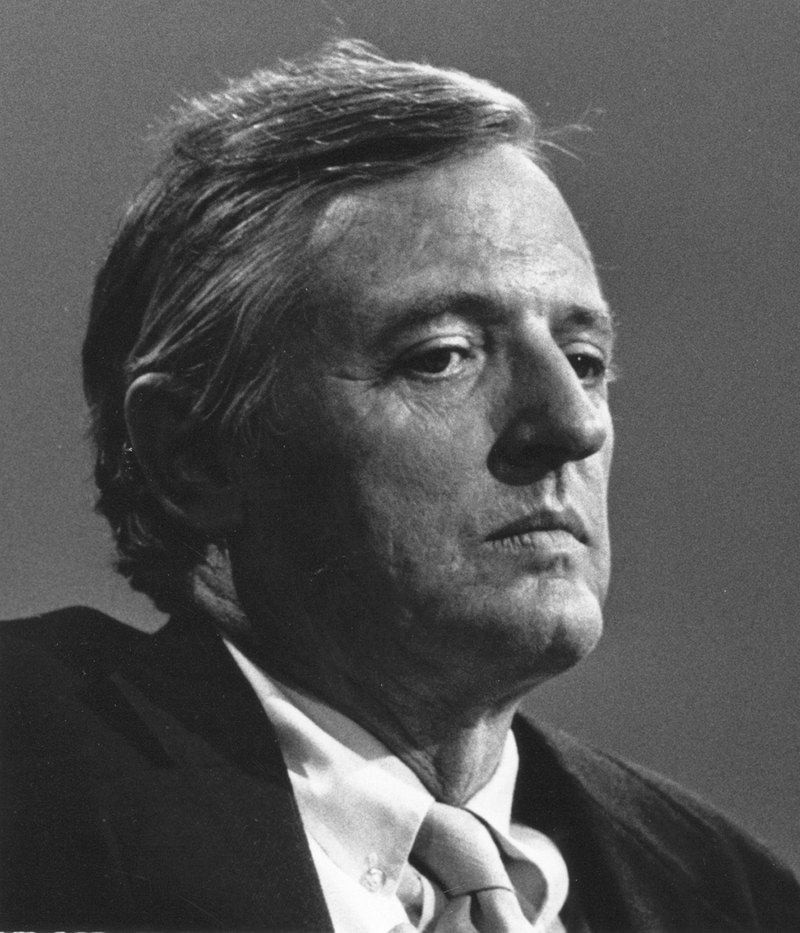 National Review Magazine founder William F. Buckley Jr. is seen in an undated handout photo. Writer and commentator William F. Buckley, a revered figure and intellectual force in the American conservative movement for decades, died on Wednesday at age 82, said the magazine he founded, the National Review. REUTERS/National Review (UNITED STATES). NO SALES. NO ARCHIVES. FOR EDITORIAL USE ONLY. NOT FOR SALE FOR MARKETING OR ADVERTISING CAMPAIGNS..

When Ted Cruz attacked Donald Trump for exhibiting New York values, Trump reminded his younger rival that the Big Apple wasn’t all bad and that it indeed has produced some important figures in the conservative movement.

And then he mentioned William F. Buckley.

I have been thinking a lot about Bill Buckley lately and how badly the Republican Party needs his leadership today.

Buckley, who founded the National Review and became, in the 1960’s and 1970’s, the face of modern conservatism, was firmly grounded in reality. He saw the world for what it was and not for what some conspiracy theorist might say it could become.

Buckley was a traditional conservative with some libertarian tendencies. He was a Catholic, so he had an appreciation for the importance of good values built on a history of philosophical and theological thought.

He wasn’t a sole scriptura guy, and as a Catholic, he had a keen appreciation for some of the dangers of heresy that we hear every day in the political discourse of this country.

Geoffrey Kabaservice wrote in “The New Republic” about Buckley and his views of extremism:

Buckley felt that outlandish stances discredited conservatism by making it seem “ridiculous and pathological,” as he wrote to a supporter who had criticized his editorial. They allowed the media to tar all conservatives as extremists, and turned off young people. He insisted that conservatism had to expand “by bringing into our ranks those people who are, at the moment, on our immediate left—the moderate, wishy-washy conservatives” who comprised the majority of the Republican Party. “If they think they are being asked to join a movement whose leadership believes the drivel of Robert Welch,” he warned, “they will pass by crackpot alley, and will not pause until they feel the embrace of those way over on the other side, the Liberals.” Buckley consistently maintained that conservatism was the “politics of reality."

Buckley himself wrote about his efforts to purge the conservative movement of his wingnuts in Commentary Magazine, especially his battles with the Founder of the John Birch Society:

In the early months of 1962, there was restiveness in certain political quarters of the Right. The concern was primarily the growing strength of the Soviet Union, and the reiteration by its leaders of their designs on the free world. Some of the actors keenly concerned felt that Senator Barry Goldwater of Arizona was a natural leader in the days ahead.

But it seemed inconceivable that an anti-establishment gadfly like Goldwater could be nominated as the spokesman-head of a political party. And it was embarrassing that the only political organization in town that dared suggest this radical proposal—the GOP’s nominating Goldwater for President—was the John Birch Society.

The society had been founded in 1958 by an earnest and capable entrepreneur named Robert Welch, a candy man, who brought together little clusters of American conservatives, most of them businessmen. He demanded two undistracted days in exchange for his willingness to give his seminar on the Communist menace to the United States, which he believed was more thoroughgoing and far-reaching than anyone else in America could have conceived. His influence was near-hypnotic, and his ideas wild. He said Dwight D. Eisenhower was a “dedicated, conscious agent of the Communist conspiracy,” and that the government of the United States was “under operational control of the Communist party.” It was, he said in the summer of 1961, “50-70 percent” Communist-controlled….

“How can the John Birch Society be an effective political instrument while it is led by a man whose views on current affairs are, at so many critical points . . . so far removed from common sense? That dilemma weighs on conservatives across America. . . . The underlying problem is whether conservatives can continue to acquiesce quietly in a rendition of the causes of the decline of the Republic and the entire Western world which is false, and, besides that, crucially different in practical emphasis from their own.”

As Kabaservice writes in The New Republic:

“Having spent the better part of a decade doing research in Buckley’s archives, I can attest that it was no easy matter for Buckley to take on Welch and his Society. Many of the financial backers and readers of Buckley’s National Review magazine admired Welch and his organization; Buckley’s own mother was a Bircher. His editorial colleagues warned that criticizing Welch risked splitting the conservative movement. Buckley’s position as movement leader would be jeopardized by the liberal plaudits that predictably would follow his editorial condemnation of the Birchers; as Buckley put it privately, “I wish to hell I could attack them without pleasing people I can’t stand to please.”

Nonetheless, in February 1962 National Review ran a six-page editorial against Welch, arguing that he was damaging the anti-Communist cause by “distorting reality” and failing to distinguish between an “active pro-Communist” and an “ineffectually anti-Communist liberal.” It would be several years before Buckley excommunicated all Birchers from the conservative movement, but his editorial emphasized that “There are bounds to the dictum, Anyone on the right is my ally.”

Buckley paid a price for his stand, as National Review endured torrents of angry letters and cancelled subscriptions, and the defection of some of its deep-pocketed donors. But in the long run, Buckley’s break with Welch saved conservatism. At the time Buckley wrote his editorial, the movement had been tainted by its association with the Birch Society: In the spring of 1962, Buckley was considered such a fringe public figure that he was invited, in earnest, by Hunter College to speak in an “Out of the Mainstream” lecture series along with leaders of the Nation of Islam, the Communist Party, and the American Nazi Party. By separating conservatism from the Birchers, Buckley made his movement respectable and introduced it into the mainstream of American political life.”

The John Birch Society is making a bit of a comeback. First, it was Glen Beck who made steady reference to Birchers on his old show on Fox, and now some of those same ideas are spreading to talk radio hosts like Mark Levin, Ann Coulter and Laura Ingraham.

The Birchers historically have had a lot of big concerns, mostly centered around communism. Welch made his biggest claim to fame by accusing beloved Dwight Eisenhower of being a communist.

But as the threat of communism has receded, the Birchers have taken on another cause, immigration.

Immigration has been an enduring fact of life in America since its very beginnings. There are times when it has ebbed and when it has flowed.

Immigrants flowed into America in the late 19th century. It ebbed during the Great Depression and during the Second War, before it steadily picked up again after the war years.

You can see strands of John Bircher extremism in some of the rants aimed at immigrants these days.

As Republicans gathered in Baltimore, Senator Jeff Sessions and Congressman David Brat released a Dear Colleague letter that called for sharply limiting legal immigration into the United States, making some very questionable claims about the history of immigration.

After the numerically-smaller 1880-1920 immigration wave, immigration was reduced for half a century.  There was no net increase in the immigrant population over a fifty-year period – in fact, the foreign-born population declined substantially between 1920 and 1970.  During this mid-century period of low-immigration, wages surged, incomes soared, the melting pot churned, and – crucially – millions of immigrant workers were now able to climb out of the tenements and into the middle class.

It fails to mention that two huge events, the Great Depression and the Second World War, which helped to stem the flow of immigrants into America.  The Cold War also made it difficult for people to migrate to America.

Wages increased in the 1950’s and the 1960’s because of bigger economic and political realities (Depression in the 1930’s and total war in the 1940’s kept wages artificially low), not because immigrants were kept out of America.

And most economic studies show the immigration patterns into America have helped grow the economy.

Ronald Reagan deeply believed in the positive impact of immigration into America, which is why he signed the 1986 immigration reform bill that helped open the door to more immigrants.

Immigration is especially important to the United States because white Americans, especially in rural America, have actually declined in population.   Fewer white Americans are being born than are dying. If it weren’t for immigrants, the population decline would lead to a collapsing economy and a declining wages for all Americans.

Immigration is just one area where the right wing has gone unhinged.

Obama’s birth-certificate, the jihad against all Muslims, the desire to create a crisis on the debt limit, the efforts to purge the Republican Party of John Boehner, the attacks on Mitch McConnell, it is all evidence of a movement in serious need of some adult supervision.

Unfortunately, we don’t have a Bill Buckley anymore and it doesn’t look like there is anybody who has the stature or the intellectual heft to stand up to the crazies and yell, STOP.