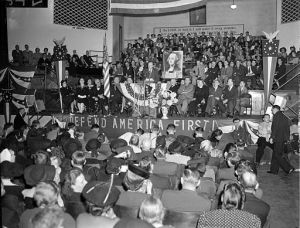 "Amrally" by The original uploader was Jerry Jones at English Wikipedia - Transferred from en.wikipedia to Commons.. Licensed under Copyrighted free use via Commons - https://commons.wikimedia.org/wiki/File:Amrally.jpg#/media/File:Amrally.jpg

As Europe was engulfed in its second violent, all-encompassing war of the 20th Century, America split into two camps.

Franklin Delano Roosevelt became increasingly concerned about the brutality of the Nazi regime, and he engaged in a campaign to guide the United States into an alliance with Great Britain.

Others were not interested in getting America involved in another European War.

Industrialists including Robert McCormick, the publisher of the Chicago Tribune, William Regnery, who will later become famous for becoming the publisher of conservative writers, Sterling Morton of the Morton Salt Company, and many others came together in opposition to Roosevelt’s efforts.

In September of 1940, thanks to the seed money of these millionaires, the scion of the Quaker Oats Company, Douglas Stuart, founded the America First movement on the Yale campus. Keeping America out of the European War was not an unpopular or irresponsible position for many of those who initially supported this movement. Later political luminaires, including Gerald Ford, Sargent Shriver, Potter Stewart, were early supporters. John Kennedy also gave America First a hundred bucks, which isn’t that surprising because his father was more than an idle supporter.

The spokesman for America First was Charles Lindbergh. Outside of FDR, Lindbergh was the biggest celebrity of his era. He was the first to fly solo over the Atlantic. He was a rock-star who commanded huge attention. When his baby was kidnapped and later found murdered, it was dubbed the biggest story since the Resurrection.

Lindbergh admired Adolph Hitler and especially his efforts to build his modern and impressive air fleet, the Luftwaffe. He had met with him several times and found him to be quite a reasonable chap.

And although he denied it, Lindbergh had more than a tinge of anti-Semitism in him. In a speech on September 11, 1941, Lindy blamed the British, the Jews and the Roosevelt Administration for guiding us into war. Lindbergh was also a white supremacist, writing in Reader's Digest in 1939, “We can have peace and security only so long as we band together to preserve that most priceless possession, our inheritance of European blood, only so long as we guard ourselves against attack by foreign armies and dilution by foreign races.”

In summing up his racial theories, especially as it pertained to the Jewish race, Lindbergh wrote in his diaries, "We must limit to a reasonable amount the Jewish influence ... Whenever the Jewish percentage of total population becomes too high, a reaction seems to invariably occur. It is too bad because a few Jews of the right type are, I believe, an asset to any country."

There is still today an America First political party.

It is a party dedicated to the same principles that animated the first America First movement. It is deeply isolationist. It wants to immediately suspend all immigration because it fears that too many foreigners are spilling into this country. It is fiercely protective of the Second Amendment. It is largely conspiratorial in its approach.

And I mention all of this because Ted Cruz paid homage to America First during the Republican debate the other night.

Cruz has taken to attacking neo-conservatives lately. Most political observers believe that attacking “neo-cons” is a more polite way to attack the Jewish leaders of the movement.

Cruz also has become deeply isolationist, condemning Marco Rubio’s support of removing Libya’s Kaddafi and wondering why we should take out any dictators who abuse their own people but otherwise keep the peace.

Cruz has also become virulently anti-immigration, basically saying that he wouldn’t support any efforts to grant legal status for any undocumented people who are currently in America.

If you listen to Cruz carefully, he has become in many ways a modern version of Charles Lindbergh, without ever having done anything heroic to get famous, other than become a champion debater.

This is what he said in the debate the other night: “I believe in an America first foreign policy, that far too often President Obama and Hillary Clinton — and unfortunately more than a few Republicans — have gotten distracted from the central focus of keeping this country safe…. We need to focus on American interests, not on global aspirations.”

The week before the debate, Cruz and his partner in crime, Jeff Sessions, introduced the American Jobs First Act, which was another effort to curtail the number of foreigners coming into America to work.

America First sounds like a political winner, but in actuality its not.

It didn’t work for Charles Lindbergh, who sullied his reputation and forever marred his place in history.

It didn’t work for Pat Buchanan, who took up his pitchfork and successfully derailed the reelection of George H.W. Bush, but could never make more than a minor impact on the Presidential stage.

The America First movement is a political loser. It might inspire a small band of anti-immigrant isolationists, but it’s a philosophically and morally out of step with the broad sweep on American history.