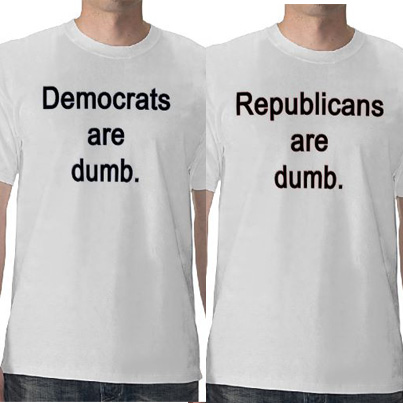 On my way to Tampa, I walked in a novelty shop in Reagan Washington Airport (I thought I could buy a magazine there, which I couldn’t), and I noticed a t-shirt that said something pejorative about Republicans (something along the lines of “You must be an idiot to be a Republican”).

I was momentarily taken aback until I looked at the t-shirt next to it, which countered the first T-shirt with a similar message about the Democrats (something along the lines of  “You must be an idiot to a Democrat”).

I noticed that there wasn’t a third t-shirt that said that you must be an idiot to be an independent, which is typical for Washington.  Nobody wants to call the independents idiots, because you need the independents to win elections, and there is no use in offending them.  Although, most Washingtonians have already picked a side and built their livelihoods on picking that side, so they think that most independents are idiots, and annoying idiots too.

The great thing about the novelty shop is that they don’t care if you are a Republican or a Democrat.  They are well-hedged to capture both sides of the market.  For them, a perfect world comes when there are an equal number of Republicans and Democrats and that those Republicans and Democrats are so annoyed with the other side that they will buy a T-shirt to proclaim how smart they are and more importantly how dumb the other side is.

It wouldn’t hurt if the independents would buy two t-shirts, one on both sides.  That way they can really capture the marketplace.

In his last column, the guy who is in charge of calling bullshit when he see bullshit, said in no uncertain terms that the New York Times is biased big-time against the GOP.  Now, you could mark down “no shit” in your calendar entry for the day, but the big editor at the New York Times, Jill Abramson, wrote a tart reply saying that there is no bias at the Old Gray Lady.

We all know what kind of T-shirts they wear in New York.