A Visit to Montpelier 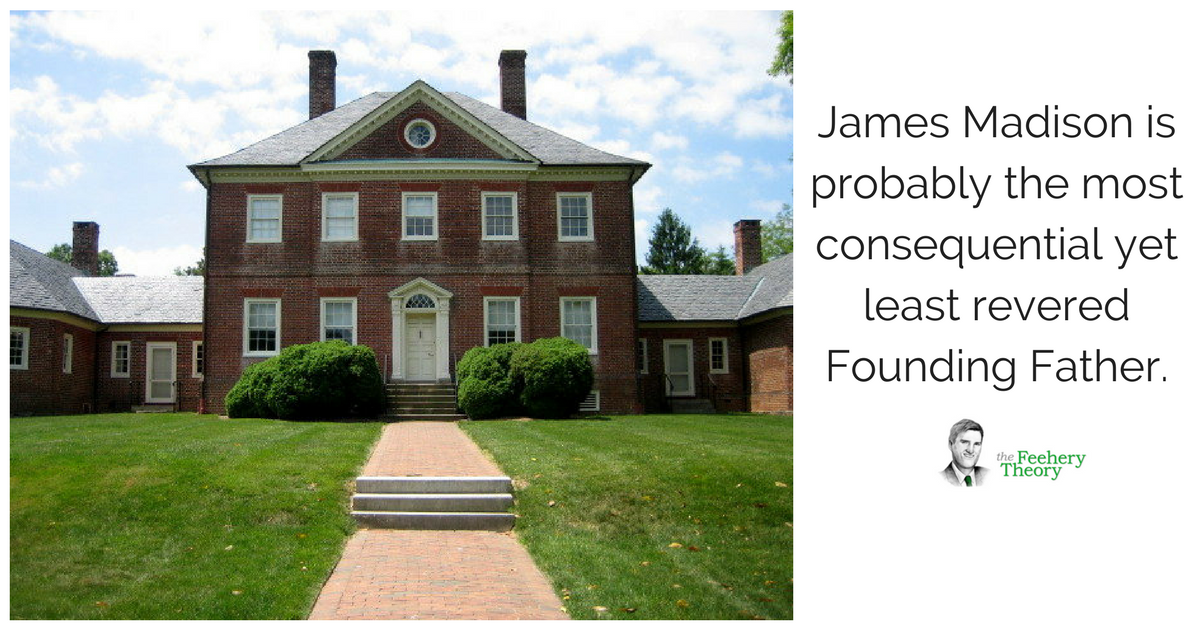 “A Republic if you can keep it.”

We were touring Montpelier and the tour guide quoted Ben Franklin to conclude his excellent presentation on the life and times of James Madison.

We were standing in President Madison’s library, overlooking the Blue Ridge Mountains, the place where he conceived of our Constitution.

We still live in a world constructed by Mr. Madison.

The diminutive fourth President is probably the most consequential and our least revered Founding Father.

George Washington has our Capitol City named after him.  John Adams had a HBO series that detailed his life.  People, especially Tea Partiers, love to quote Jefferson’s comments about revolution.  Alexander Hamilton and Aaron Burr have a rap opera dedicated to their lives.  And the fact that the noted quipster Franklin gets the last line in the Madison home tour seems to amplify my point.

We don’t appreciate the contribution of the Sage of Montpelier enough.

James Madison mostly escapes the attention of our nation’s conversation, despite the fact that it was his hard work that helped to define it.

Without Madison’s First Amendment, we would be living in Russia.  Well, not really, but when Donald Trump attacks the media, he does so secure in the knowledge that he can bitch about that opposition as much as he wants, but he can’t do much about it.  The freedom of the press is secure and ensconced in our national fabric, no matter how much it may rankle the politicians.

That First amendment was inspired not by a love of the Main Stream Media, but by some Baptist ministers who complained to Mr. Madison about a tax they were forced to pay so that they could practice their religion.  Back before the Constitution was adopted, the Anglican Church was the only game in town when it came to state-sanctioned religious enterprises.

And the Anglican Church was the only one that didn’t have to pay the Church tax.

Madison was a deist, like his close friend and ally Mr. Jefferson.  He probably thought his Baptist friends were a bit nuts in the head, but he defended their right to preach whatever they wanted without interference from the State.  That's why he worked hard to protect religious liberty first in Virginia and then everywhere else.

Madison’s deism probably wouldn’t pass muster today in today’s super-charged world of religious orthodoxy, especially in a Republican Primary (although, to be fair, Donald Trump’s love of Norman Vincent Peale is not particularly orthodox either), but his defense of the freedom of religion makes America a vibrant place for the religious to practice their faiths.

And it is that promise enshrined in our Constitution that makes any “Muslim” bans, either temporary or permanent, illegal in this country.

When James Madison got the Congress to pass the first ten amendments to the Constitution, which we now call the Bill of Rights, he did so in the expectation that the American people would elect less than optimal people to positions of high power.

He was right about that.  But the system of government he designed is durable.  And unique.

I took my two children and my son’s friend Copeland to visit Mr. Madison’s ancestral home on President’s Day because I needed something for them to do, and because I had never been there before.

It’s a short two-hour drive through some beautiful rolling hills in the center of the Old Dominion.

And it is well worth the visit.

The kids enjoyed the tour (well, at least my 10 year old did.  The four year old was kept in line with a promise of a toy in the gift shop afterwards if she behaved, which she did).

And we all learned a great deal.

We learned that Madison plowed through a hundred books lent to him by Thomas Jefferson as he constructed the outlines of the Constitution.  He examined every known system of government in history to find something that would work for us.

We learned that his wife, Dolly Madison, established all of the norms for how a first lady should act.  She was so revered in Washington that she was given a special seat in the House of Representatives, from which she would follow the debates.

When she died, she was given a State funeral bigger than any public figure in the history of Washington.  She was that popular and that consequential.

We learned that Madison and his wife had a history of financial difficulties that bedeviled them throughout their lives and that Madison’s adopted son was a ne’er do well who would become an increasingly heavy financial burden to the family.

We learned that the Madison family home would be sold eventually to the DuPont family and that they would make substantial changes to the home to fit their lifestyle.

We learned that James Madison owned more than a 100 slaves and that he never thought about setting them free, despite the lofty ideals he promulgated in his founding documents.  Madison was aware of this dichotomy, but did nothing to resolve it.

We also learned that Madison died at age 87 of complications from rheumatoid arthritis.  For the last couple of years of his life, he couldn’t move without the help of his valet (and slave) Paul Jennings.

Jennings would later go to work for Daniel Webster, the famed Senator, who would grant him his freedom.   He would become active in the Underground Railroad and become an avid abolitionist.

One other neat note.  Madison met his wife Dolly through his college classmate, Aaron Burr.  Yes, that Aaron Burr.

You can learn a lot of things by taking a trip to Montpelier.

One thing I learned is that we owe James Madison a huge debt of gratitude for helping the build this house called America.

We can keep this Republic.  We just have to have faith in it.