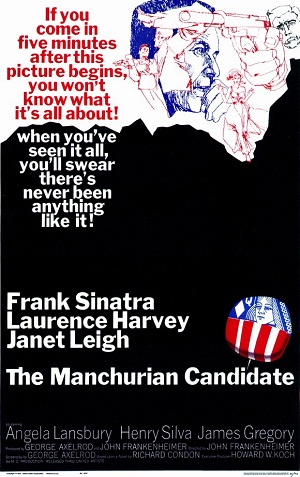 In 1962, Frank Sinatra and Angela Lansbury starred in a black-and-white thriller, based on a novel written by Richard Condon, called The Manchurian Candidate.

The movie won an Academy Award and captured the imagination of a public that was insecure about the Cold War and unsettled by the communist threat.

American democracy was terribly vulnerable to the fiendish plots of foreign agents – that was the central premise of the movie and the central preoccupation of conspiracy theorists.  That paranoia lingers.

When Bill Clinton was elected to the White House in 1992, Republican operatives questioned his visits to Moscow at the height of the Cold War, as the Vietnam conflict raged on.  Was he a tool for the Communists?

When the towers came down In New York on September 11th, conspiracy theorists immediately assumed that the Bush Administration was somehow complicit, with either the Saudis or the Israelis being the nefarious foreign agents.

When Barack Obama assumed office, the right wondered about the new president’s ties to the Muslim Brotherhood and to communist sleeper cells.  Was he a Manchurian candidate for radical Islam?

Now, we have the latest conspiracy theory.

This one involves our new president.  Is Mr. Trump a tool for Vladimir Putin?

There certainly seems to be a lot of evidence.

Before he became president, he tried to open hotels in Moscow.  He wasn’t successful doing so, but, you know, it’s all in the effort.

His son once said that the Trump portfolio had a heavy dose of Russian money.

His former campaign manager once represented a Ukrainian politician who had the favor of Mr. Putin.

His former National Security Advisor once travelled to Russia and talked to real Russians.

His current Attorney General met with the Russian Ambassador, twice.

Mr. Putin, apparently, wanted Mr. Trump to win.  So, obviously, that is a case of Russian interference.  Let’s forget about the fact that Hillary Clinton once got involved in a Russian election and her candidate lost, to Vladimir Putin.

I’m sure that had nothing to do with anything.

There is plenty of other evidence that Mr. Trump is the new Manchurian Candidate.

He refuses to say anything really bad about Mr. Putin and once called him a “strong” leader.

He says that we need a new relationship with Russia, one that isn’t as hostile as the previous regime.  He would call it a “reset” but that phrase has already been taken, by Hillary Clinton.

He says we should cooperate with the Russians in the battle against ISIS.

And, of course, he has promised to spend $54 billion to upgrade our national defenses, including upgrading our nuclear capability.  He wants a strong economy, with a complete overhaul of our tax system.  He wants to gut Obamacare and replace it with something better.

All of these are agenda items for Vladimir Putin.

Except, of course, they aren’t.

He has no plans to turn America into a Soviet paradise.  He isn’t a stooge for Mr. Putin.   He doesn’t want to make America weaker so that Mr. Putin can make Russia stronger.

This whole thing is ridiculous.

But that is nonsense.  Hillary Clinton lost because she was a bad candidate who didn’t connect with enough voters in Ohio, Michigan, Wisconsin, and Pennsylvania.

She lost because she didn’t have a coherent campaign theme and because she epitomized the status quo.

The Democrats are getting plenty of mileage milking the Putin conspiracy theory.  We have seen this before.  I remain unconvinced.