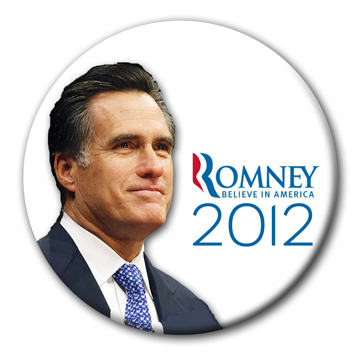 Mitt Romney has had a bad couple of weeks.  That is undeniable.

Here are ten ideas that can help get him back on offense.

10. Beg Chris Christie to move to Ohio for the next 47 days. If any Republican can connect to Ohio’s blue collar voters, it is the big man from New Jersey
9. Pledge to finish the job to preserve the Everglades in Florida in a press conference overlooking the swamp.  Will help with some swing voters in the Sunshine State.
8. Visit Notre Dame during a football game.  Hang out in the parking lot and talk to students and Alumni.  The Catholic vote hangs in the balance and there are a lot of Irish fans in the Midwest.
7. Unveil 10 things Obama has done as President that have killed jobs that Romney will immediately reverse.  Start with the Keystone Pipeline.  Sign a mock executive order in Omaha to allow the pipeline to start construction in the Northern part of the country (Omaha has its own electoral vote).
6. Appear on the Ellen Show.  Bring your wife.
5. Reverse your position on Wind Energy in Iowa.  Call for a 5-year ramp down of the Production Tax Credit, so that Iowa jobs won’t be lost in this critical swing state, especially right before the election.
4. Announce that under a Romney tax reform plan, the Romney family’s taxes would go up, while the average American’s taxes would go down.  Most Americans don’t understand how Romney can pay so low a percentage of his income in taxes.
3. Go to the Badger State and express your support for the Wisconsin dairy pact.   Sure, it is pandering, but they love their cheese in Wisconsin.
2. Have a Romney Super-Pac run ads in Northern Virginia reminding women voters that you were a big-time moderate on social issues when you were the Governor of Massachusetts.
1. Use  a script.  Every time you  have gotten in trouble, it is because of your big mouth.   Stick tightly to your talking points.