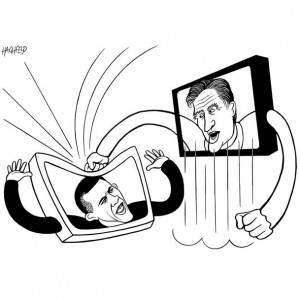 Historians will come up with their own theories as to why Barack Obama lost his bid for reelection.  I am going to get a jump on them.

To all that, I say bunk.

The President blew it.  It is as simple as that.  He had perhaps the biggest mandate from the voters since 1932, and his inexperience, arrogance and inflexibility conspired to sink his Presidency.  The fact that his governing philosophy was far out of step with the philosophy of the vast majority of Americans didn’t help.

In dealing with Congress, the President backed down when he should have stood firm and stood firm when he should have backed down.  In his first two years, the Congress, and especially the House, ran roughshod over the President and his reputation.  They passed a pork-laden stimulus bill that (a) didn’t work and (b) proved to extraordinarily unpopular with the American people.  Nancy Pelosi then insisted on passing a job-killing cap and trade bill that alienated white working class voters who were worried about finding a job.   Then, towards the end the first two years, Mr. Obama didn’t stand firm on taxes, and he kept a political issue alive that has conspired to paint him a left-wing populist, tax cuts for the rich.

When the President most needed a deal to prove he could govern from the center, he decided to become inflexible.  He screwed up the so-called “Grand Bargain”, by insisting that Republicans raise taxes by close to trillion dollars more than they could accept.  And this year, when the most important thing for job creation was greater certainty, the President decided to continue to roil the waters by again insisting on raising taxes on upper middle class voters.

The President also squandered a great opportunity with the business community.  Wall Street bankers helped to bankroll his election and what did he do in return?  He vilified them.  He attacked them.  He scared them.

He has some big names in his corner, like Warren Buffett, but the Oracle from Omaho is a lonely voice.  Obama created a Jobs Council, chock full of smart business guys, and he has met with it once this year.   Instead of using these savvy business leaders as a sounding board, he used them solely as a photo op.  Instead of taking their ideas and running with them, he fumbled them and then kicked them out of bounds.

The business community desperately wanted to do something on health care, but instead of working with it, he came up with an awkward, odd construct of a law that threatens small business and makes it more difficult for businesses to hire new workers.

The business community and Hispanic leaders wanted a deal on immigration.  The President did nothing his first two years (when he had overwhelming majorities) and then refused to do anything except a weakly-worded executive order, hoping to use the issue to bash Republicans.  Just imagine if he had a gotten a deal, how he could have divided and conquered.  Instead, he alienated and obfuscated.

It was Joe Biden who coined the phrase, “Osama bin Laden is dead, and General Motors is alive,” and it is a catchy, funny line.  But it is also far too specific.  A foreign policy is not built on killing one man, and a domestic policy is not built on keeping one company alive.  Obama thought he could rest on his laurels, but the voters want more from their leader.

President lost because he didn’t do a very good job of governing.  He didn’t move to the center.  He didn’t get the job done.  He focused on the wrong things at the wrong time and he made enemies when he could have created allies.

Let me be the first to say.  The President lost because of what he did, not what others did to him.