Who Wins A Shut Down? 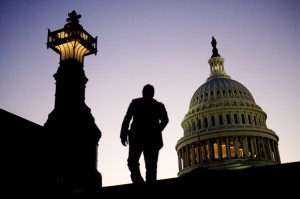 If the government shuts down, does anybody win?

Washington is abuzz with the possibility that the Federal Government might shut down when the current spending authority expires on March 4.

The last time the government shut down for an extended time period was in 1996, when Bill Clinton battled with Newt Gingrich over the size and scope of the budget.

Most pundits believed then and believe now that Gingrich lost that battle because Clinton got re-elected in 1996.

And in the short-term Republicans did lose the public relations war.

But if you take a longer view, Republicans accomplished many of their fiscal and political goals.

They actually did balance the budget two short years later, and by the end of the century, the government was actually running a surplus.

They also forced Bill Clinton to sign welfare reform, their signature issue from the “Contract with America.”

Indeed, Republicans might have lost the short-term PR battle, but they won the long-term PR war.

These days, Congressional Democrats are salivating over the possibility that once again Republicans will be blamed for closing down the government.

In fact, that is all the Democrats can talk about. But I think they should be careful what they wish for.

The last government shut-down helped to usher in a solid decade of Congressional dominance for House Republicans. That is a lot of long term gain for a relatively short period of PR pain, and that is a tradeoff I am pretty certain Republicans would be happy to take if given the chance.

Nobody wants to shut down the government. But Democrats who assume that a government shutdown will be a bonus for them ought to think again.