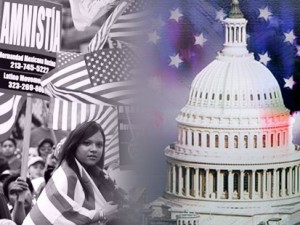 I agree with Ed on immigration policy, and I think his point carries over to the latest debate that has engulfed Congress.

Since they took over the Congress in January, they have had a pretty consistent message. They want to cut spending and create jobs.

Now, this isn’t an easy message to convey. It takes discipline, it takes solid examples, and it takes repetition.

Last week, House Republicans passed a monumental spending cut bill. It didn’t just trim spending. It took a $61 billion dollar whack out of discretionary spending in one year, the single largest spending cut package in the history of the Congress.

I got the message that the Republicans cut spending loud and clear. In fact, that was pretty much all I heard.

What I didn’t hear was how this spending cut package was going to create jobs.

I didn’t hear the Republicans finish the sentence.

I heard the Democrats say that this spending cut bill would kill jobs. In fact, that was their number one talking point.

The Republican talking points were about fiscal austerity: How we were going broke as a nation, how Obama spent too much money, how we needed to balance our budget.

While cutting spending plays well with the Tea Party base, it doesn’t play that well with the rest of the country as a singular issue. Creating jobs and growing the economy are by far the top priorities of most Americans.

I don’t disagree with the philosophy behind the spending cuts, although I don’t think cutting that much discretionary spending so quickly makes sense politically.

What the House Republicans need to pivot to very quickly is a message of job creation. Cutting spending is good for the base. Creating jobs is good for everybody.

Republicans need to remember to finish the sentence. Cut spending, yes, but don’t forget to create jobs too.