Who Is Winning the Budget Fight? 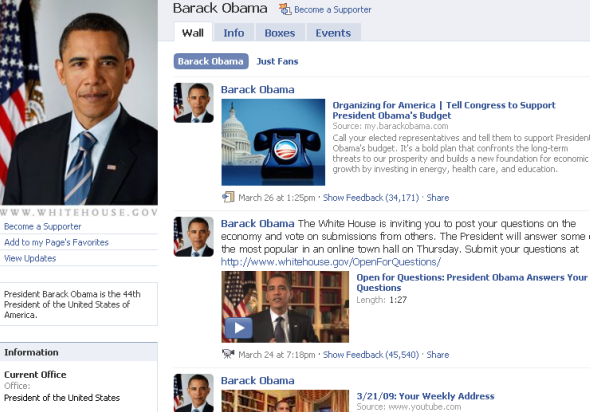 The President traveled to Facebook yesterday to make the case to his Facebook friends that he is still the same old Barack Obama, the mythical figure who would deliver us all from the evil of the Bush Administration, that he said he was when he electrified the voting public two short years ago.

The problem for St. Barack is that the voters are getting wise to his schtick.

According to the Real Clear Politics poll of polls, Mr. Obama is pretty much near his all-time high when it comes to his unpopularity. In January of 2009, only 19 percent of the voters disapproved of the job he was doing. Today, over 50% disapprove.

While Congress as a whole is less popular than the President, voters prefer Republicans more than they prefer Democrats to be elected to Congress, according to the latest surveys. Given that Republicans are taking on high-profile challenges, and given that the Democrats have already thrown up millions of dollars worth of ads attacking GOP budget votes, the fact that the Republicans haven’t completely fallen apart in the polls is remarkable.

Part of the problem for the President is the realities outside the realm of the Congress. Gas price increases make voters cranky and they tend to blame the guy who occupies the Oval Office. The increase in food prices also makes consumers mad. The President’s uncertain handling of the various crises that have hit the Middle East, more specifically his getting us involved in a shooting war in Libya without telling us about it, also must play a role.

And there is the fact that evidence is piling up that we are going really broke, really fast. Standard and Poor’s downgraded our debt rating. The lead investor for Pimco is telling people that he isn’t buying 30-year Treasuries any more. Neither are the Chinese. All of that has to make consumers and voters very uncomfortable.

The President’s response to all of this has been pretty weak. His much-ballyhooed speech on the deficit turned out to be another campaign defense of raising taxes and increasing government spending on health care. Even leading left-leaning newspapers are wondering why the President isn’t leading on the budget debate.

Paul Ryan, John Boehner and Eric Cantor are leading. Ryan’s budget is innovative, his approach is fresh, his appearance is youthful, his hair is kind of trendy. Boehner is cool, disciplined and hard to make a villain. Cantor is going to universities and talking about innovation in the market place, and making the connection between government budget responsibility and private sector growth. They are pushing forward, while the President is trailing behind. They are setting the pace, and Mr. Obama is panting just to keep up.

Mr. Obama went to Facebook to try to reconnect to younger voters, but polls show that while he still has a sizeable lead against the Republican field, his support is much less engaged and much less energized.

In the tug of war over the budget, it is the Republicans who are pulling harder, while Mr. Obama seems to be merely hanging on for his political life.