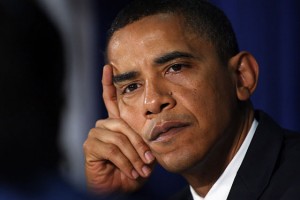 I might have put it differently. Obama has failed to even show up.

Woody Allen once said that 9/10ths of any job is just showing up. The President is not currently meeting that threshold.

When it comes to entitlement reform, the President once again was a no-show. His new budget director, Jack Lew, who by all accounts is a nice guy, improbably said that the President didn’t unveil a plan to deal with entitlements because he didn’t want to inject partisanship into the debate.

That is why the President didn’t endorse the recommendations that came from his own deficit commission. He ran away from them…as fast as he could.

When it comes to the crisis in Libya, the President has been embarrassingly absent. He is more than a step behind, and his vacillating leadership is given Muammar Ghaddafi great confidence that he can survive this challenge to his rule.

Obama indecisiveness on Libya was preceded by confusion on Egypt, which was preceded by bewilderment in Tunisia. Obama seems uncertain, clueless, and largely absent from all the major conflicts in the world.

And that includes the conflict in Wisconsin. The President first decided to back the protestors in Madison until he read the polls and decided that wasn’t such a good idea. Now, he is just a bystander to the conflict, refusing to put in a good word for the taxpayers while also refusing to say anything about those AWOL State Senators who presumably still get paid for not showing up to work.

Where’s Waldo was a series of children’s books that depicted big groups of people doing a variety of funny things at a certain place. The challenge for kids, of course, was to find where Waldo was. Today, there are big groups of people doing a bunch of not-so-amusing things and the challenge for the American people is to out where the President is. The problem is that it is just about impossible to find the President taking a leadership position on any of the big issues of the day. If you don’t believe me, just ask Joe Manchin.