Buried in the News 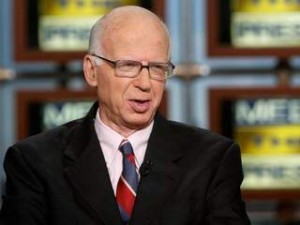 The Space Shuttle Discovery completed its final mission yesterday and David Broder went to his final resting place. Somewhere in the future, some enterprising historian is going to write a book about the connection.

Broder came to Washington in the second term of the Eisenhower Administration, and was there when Jack Kennedy announced his plans to take us to the moon.

Back then, journalists strived to be objective, although they didn’t cover all the news that was fit to print. They ignored Kennedy’s sexual dalliances, for example.

Back then, people read newspapers, and in many cities, there were plenty of newspapers to read. There was usually both a morning edition and an evening edition, and competition to get the story was fierce.

Back in the days after Sputnik we were also competing with the Russians to win the race to space, and the race to global domination.

Political coverage matured and then became more and more cynical. It was hard to keep your objectivity when you had to deal with the mendacity of Lyndon Johnson and Richard Nixon.

It was hard to be cynical about the space program, especially after we actually made it to the moon first. As America convulsed in a cultural revolution, it still was able to take the best and the brightest and make them do things that never crossed Michelangelo’s mind.

I read my son a book every night about that first trip to the Moon, and I am amazed by the bravery of those astronauts. I am even more blown away by the will of the United States government. It actually achieved a goal as outlined by an American President.

Journalism changed and morphed and became more and more partisan. Sam Donaldson became a star by acting disrespectfully towards the President. The cult of celebrity journalism was born.

The space program changed too. It became less a competition between the Soviets and the Americans and more of a collaboration between the two superpowers. They worked together to create Skylab and then the International Space Station. When the Space Station Columbia went down, it destroyed America’s confidence in the space program, and soon people doubted the whole purpose of going into space in the first place.

The Soviet Union eventually fell, but the Russians continued to participate in the International Space Station.

These days, it is the Chinese and the Indians who are investing the most in the future of Space, though.

Broder didn’t completely ignore television. He appeared on Meet the Press more than any other journalist, for example, but he never played the glamorous television personality. He played himself. He would share his opinions, but those opinions were never particularly strident or ideological.

These days, the state of journalism is a mess, as is the space program.

When George Bush proposed that we go to Mars six years ago, he was roundly lambasted by liberals and by conservatives. The shuttle program is now officially shuttered. And budget cutters are eager to get their hands on the NASA budget, to redirect the spending to something else.

And with David Broder’s passing, the journalism field has lost its Dean, with no replacement to be found.

An era in America’s history concluded yesterday, but it was buried in the news.