When the Unemployment Rate Goes Up 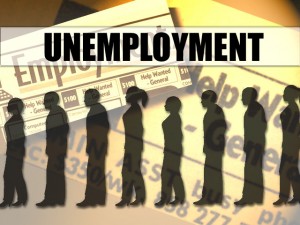 The jobless rate and economic growth are not necessarily connected.

An economy can grow without people going back to work.  Companies can make profits and not necessarily hire people.  We are now going through a jobless recovery, despite President Obama’s delusional declaration that jobs are coming back.

Government usually acts as a hindrance to private sector job creation.  Government can hinder private sector job creation in many ways.  It raises taxes – or worse, threatens to raise taxes – taking money away from companies that could be used to create jobs.  It can borrow a high percentage of money from the private sector, making private sector investment harder to get and threatening the value of the currency.  It can impose mandates that put a business out of business (like increased environmental laws or new paperwork requirements) or it can impose mandates that are specifically geared to make it harder to hire new people, like an increase in the minimum wage or the President’s new health care law.   Government can also create conditions that make it easier for lawyers to file malicious and counter-productive lawsuits, which create more jobs for litigators, but less jobs for workers.

Democrats in Congress tend to have the worst impact on the unemployment rate, since they believe in the general concept of more government and they have deep distrust of the private sector.  They push for higher taxes, more regulation and more litigation for their trial lawyer supporters.  They cloak their attacks on the private sector with high minded rhetoric like “we need a living wage”, and “tax fairness”, all the while battering small and large businesses with the government battering ram.

The stock market bubble burst, and the terrorist attack hit the U.S. in 2001, so the unemployment rate rocketed up to 4.7%, and then 5.8% and then back up 6.0% in 2003, before the Congress and President Bush worked together to pass new pro-growth policies, which brought the unemployment rate back under control to 5.5% and then 4.6% in 2006.

In 2007, Nancy Pelosi was swept into office, and Democrats pushed their job-killing agenda.  Bush fought them off for most of the first year, and unemployment held steady at 4.6%.  Eventually, though, the Democrats gained the upper hand, and their policies started hitting the business sector in 2008, when unemployment hit 5.8%.  In 2009, the unemployment rate sky-rocketed, as President Obama and Congressional Democrats continued their assault on employers, to 9.3 percent.  This year, unemployment is hovering just under 10%.

Should Republicans take control of Congress, I would expect those numbers to sink dramatically as the business community gains a greater sense of security that comes from the Republican pro-market philosophy.