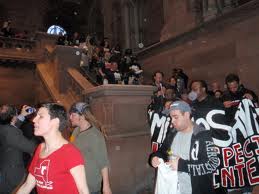 Dana Milbank had a funny story in the Post today about the pathetic protest movement that has gripped (well, gripped might be a strong word), Washington:

Attempting to emulate the Occupy Wall Street protests, Washington activists and some out-of-town guests set themselves the lofty goal of occupying the Hart Senate Office Building. “We are there to shut the place down!” organizer David Swanson told his small band of followers.

Forcing Senate staff to take the stairs is a pretty interesting way to spark rebellion in the streets.

E.J. Dionne earlier this month complained that the left needed its own version of the Tea Part Movement.

If ever there was a time for some real good protests, now is the time.

Congress is dysfunctional. Local and State governments are going broke, mostly because they have been robbed blind by government employee unions. The economy bumbles along. Many of our roads and bridges are in a state of disrepair.

We have a system in place that allows people to get paid to do nothing for 99 weeks at a time, and they don’t even have to get a drug test.

The problem is that once they have been on unemployment for two years on the government dime nobody wants to hire them, because well, they have been doing nothing for close to two years.

And somehow, this is the fault of the people who don’t want to extend unemployment for even longer.

You know who should be protesting?

The 90% of the American people who go to work everyday and pay taxes to the state, local and federal governments.

The people who pay their mortgages, even though they know their houses aren’t worth as much as they were when they first bought them, because, well, those are the breaks in life, and a contract is a contract.

The people who bathe every day, who take care of their personal appearances, who don’t look like complete slobs when they leave the house in the morning.

The people who take care to raise their kids right, who are polite to people they don’t know, who care about being good citizens, who pick up the trash that they leave behind.

These are the people who ought to protest, but they don’t.

You know why? Because they are busy.

And if they see that all of the elevator buttons are pushed, they will just walk the stairs.