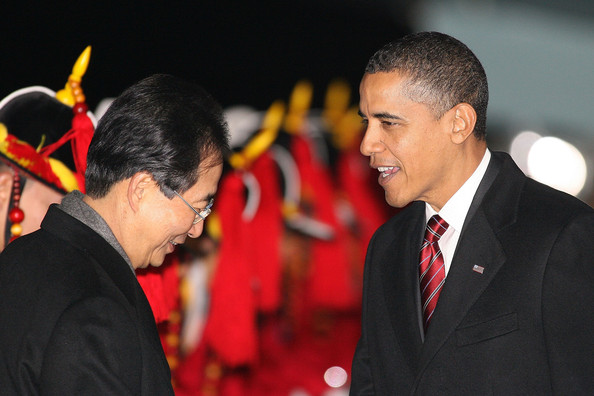 Well, that was quick.

Yesterday, as I drove through Washington’s streets, all I saw was a bunch of traffic, made worse by the 30 rabble-rousers who occupied a half-block in downtown D.C.

Today, dozens of South Korean flags were fluttering in the pouring rain.

The President of South Korea is in town, meeting with Barack Obama and addressing a joint session of Congress.

Apparently, this visit constituted an important enough deadline to compel Congress to finally act on a free trade agreement with one of our best Asian allies.

The House and Senate usually only work this quickly together when they pass a continuing resolution to keep the government open.

South Korea wasn’t the only trade pact passed in a New York minute yesterday.  So were the Colombia and Panama Free Trade agreements.

If you like NAFTA, you will love this trio of trade pacts.

If you don’t like NAFTA, you will be despondent.

The big business and the agriculture sectors love free trade.  Free trade makes it easier for our companies to sell their products at a lower price to more customers and that is something that makes farmers and multi-national CEO’s very happy.

Labor hates free trade.  More competition from foreign companies usually means lower wages for workers at the bottom rung of the chain.  Workers that are protected by labor agreements are threatened because many companies would rather move their operations overseas than be forced to pay unnecessarily higher wages for low-skill workers.

President Obama campaigned against NAFTA, you may recall.  He promised to take a look at repealing the trade agreements.  That is how he got labor support.

The President’s campaign team assailed Mitt Romney for being a “flip-flopper” for some inconsistencies in the former Massachusetts governor.

Mr. Obama is not a flip-flopper.  It seems to me that he is a liar.

He campaigned on getting rid of trade agreements like NAFTA, and now he is hurriedly pushing to expand NAFTA to other countries in Asia and Central America because he wants to save face with the South Korean President.

I am a free-trade guy.  Always have been and always will be.  So I like the fact that we have these Bush-Administration trade agreements finally in place.

But putting my pundit’s hat on, I can’t see how passing these trade agreements so quickly is going to somehow settle down either the Tea Party or the Occupy Wall Street folks.

Free trade is the right thing to do, but it is not very popular with the voters.

Fast-tracking the votes and jamming it through both the House and Senate similarly was the right thing to do, but it won’t be very popular with the voters either.

My guess is that President Obama is going to quietly sign these new trade pacts without the glare of the television cameras in his face.

Big labor may want to rethink its support for their man in the White House.