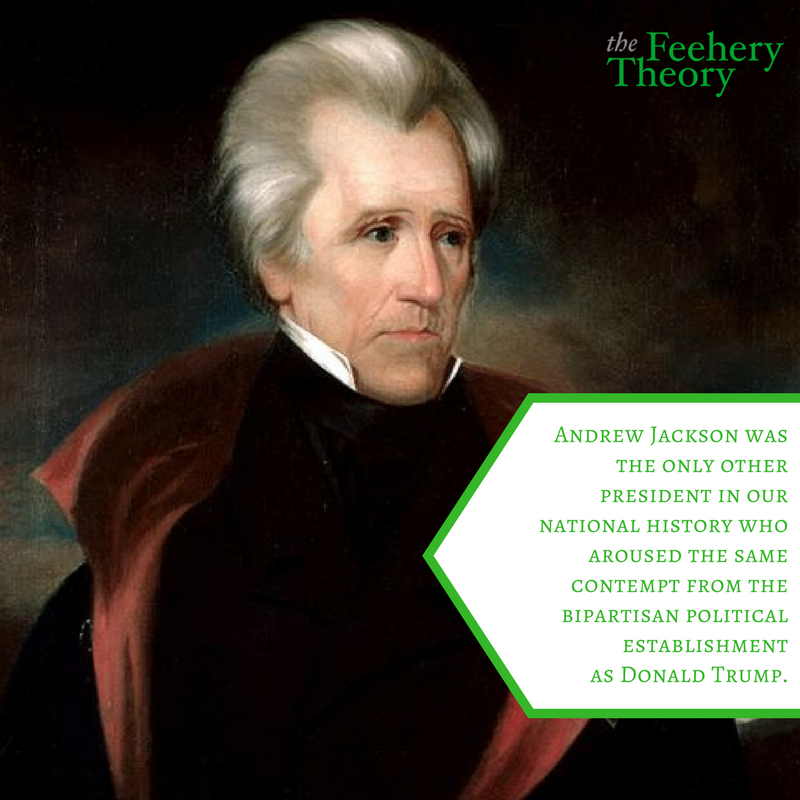 "I feel much alarmed at the prospect of seeing General Jackson as President. He is one of the most unfit men I know of for such a place. He has had very little respect for laws and constitutions….”

Thomas Jefferson’s concerns about the prospect of an Andrew Jackson presidency were widely shared among the political establishment of the time.

Indeed, in the 1824 election, which was ultimately decided by the House of Representatives, the political establishment represented by Henry Clay, the House Speaker, and John Quincy Adams, the secretary of State, conspired to keep Old Hickory out of the White House.

Despite initially voting for one of Jackson’s rivals during the so-called Corrupt Bargain election, one canny politician, Martin Van Buren, recognized the populist popularity of Jackson and became a key architect of General Jackson’s revenge candidacy.

Van Buren would later be named the secretary of State by Jackson, would become his vice president during his second term and then succeed him as president. Van Buren was a gifted political organizer, an expert campaigner and was the father of the Democratic Party.

The Jacksonian presidency was known for its effective implementation of the old adage, “to the victor go the spoils.” The spoils system, or the rewarding of government favors to political cronies, was one of the most enduring political symbols of the Jacksonian era, and it too was chiefly exploited by Van Buren, known to history as the Little Magician for his ability to give federal jobs to his friends and supporters.

But the chief spoil for Van Buren was his own political career. He bet the house on a Jacksonian presidency and won big as a result.

It is no secret and no surprise that a portrait of Andrew Jackson occupies a prominent position within the Trump White House.

Only one other president in our national history has aroused the same contempt from the bipartisan political establishment as Donald Trump, and that was Old Hickory.

Like Trump, Jackson was viewed as uncouth, unfit for office and all too common. The political class attacked Jackon’s wife, Rachel, accusing her of being a bigamist and shunning her from all Washington social events. Trump’s wife, Melania, has been accused by the political class of being an illegal immigrant, and fashion designers have refused to send her their latest creations.

If the five living ex-Presidents could vote on such things, they would vote to keep President Trump out of their exclusive club. Indeed, they all voted against him in the general election, despite their bipartisan credentials. Thomas Jefferson and John Adams both died two years before Jackson finally gained the White House, but it is pretty clear that while they didn’t agree on much, they did agree that the general had no business being president.

Last week, both President Bush and President Obama gave speeches that echoed the same general theme: They don’t like what President Trump stands for or what he is doing to our political discourse.

If the political establishment had more credibility with the average American voter on either the left or the right, those words would carry more weight.

But as it stands now, the populism of Donald Trump and of Bernie Sanders seems to have all of the momenta, while the political establishment seems to be out of step with the passions of an angry populace.

Republican establishment figures ought to figure out ways to work with President Trump and deliver solid accomplishments to restore their brand and to make progress on behalf of the American people.

Attacking President Trump — either obliquely, as President Bush did, or routinely, as the Never Trumpers do — seems to be a losing proposition to me.

He’s not only the president, but he is now the leader of the Republican Party. We gain more for the country and for the party by working to make him successful.

That’s what Martin Van Buren did.

(Also on The Hill)