Building the Dang Fence and Other False Promises 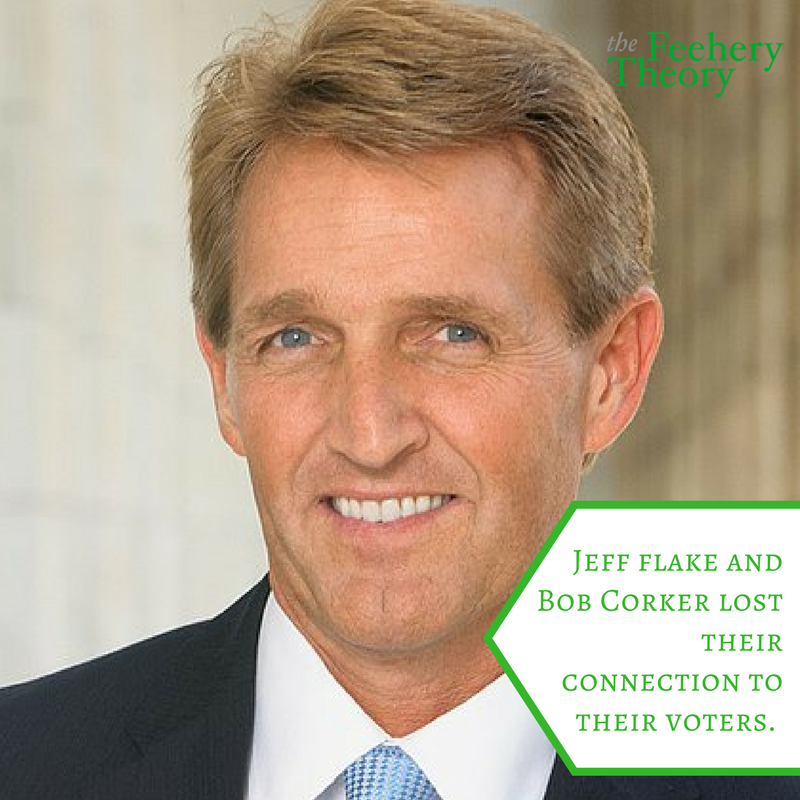 He was running a heated primary against former Congressman and conservative firebrand J.D. Hayworth and wanted to show his constituents that he too could be tough on illegal immigration.

Some might call the incumbent Senator’s advertisement to be cynical and a bit hypocritical, given his later condemnation of Donald Trump’s wall on the Mexican border.

I thought it was smart politics.

My theory on politics is that you have to figure out what voters most are worried about and then sell them on your solution.

If you don’t care what the voters care about or if you decide that their concerns are stupid or silly or irrelevant, or if you care deeply about something that they don’t care about and focus all of your campaign on that issue, well, you are going to lose.

In other words, you have to connect with the voters.

Jeff Flake and Bob Corker lost their connection to their voters.  And that is the principle reason why they are retiring from the United States Senate.

I like Jeff Flake.  He is an earnest, caring, thoughtful guy, a good family man, and as honest as the day as long.

Of course, I didn’t always agree with him.

When he was in the House of Representatives, he was a bull in the China shop.  He was an anti-earmark crusader who wrongly believed that if we only got rid of Congressionally directed spending, that somehow we would solve our deficit problems.

That was a fantasy and a dangerous fantasy at that.

By turning all spending power to the Executive Branch, the Legislative Branch has hurt itself reputationally with the voters and taken away some of the most important tools to get big legislative things done on behalf of the American people.

Ever since Congress did away with earmarks, the approval rating for the Institution has not exceeded 20 percent.  And neither has it been able to pass legislation to tackle the deficit or do much of anything else unless it has put a gun to its head in the form of some huge crisis.

Flake hasn’t evolved with the times.  He is an ardent free-trader and an ardent open-border, pro-immigration advocate.

The bulk of the Republican Party has changed its positions on both of those issues.  That’s because, ever since the crash of 2008 and the rapidly changing demographics in the country, Republican voters simply don’t believe that unfettered free trade and open borders works in their interests.

Given stagnant wages, closed factories and problems with crime and welfare abuse, it is completely rational for GOP voters to change their positions on those issues.

That Donald Trump won the majority of voters during the primary process and won the electoral college in the general election, and that was but further proof that the party had moved on from principles that were once held deeply by the party faithful.

Flake either didn’t get or didn’t want to get that the party had changed.

The Senator used his disagreements with the President’s rhetoric and his tweeting as his excuse for leaving the party.

I would venture to say that most voters probably share Mr. Flake’s concerns about the President’s use of Twitter.

They are concerned about it, but they don’t really care about it.  If they did, they wouldn’t have voted for Trump to begin with.

Donald Trump is the most openly transparent President we have ever had.  He campaigned exactly as he governed.  He hasn’t changed, he hasn’t evolved, he hasn’t magically become more Presidential.

He says politically incorrect things.  He fights back against anybody who attacks him first, and by anybody, I mean anybody.  He says things that are factually wrong on occasion.  He makes things up on the fly.  He hides his assets from public disclosure.

He did this throughout the campaign.  And he is doing that now.

But the voters don’t care about that.

What they care about is getting government off of their backs, getting the economy growing, getting rid of bad trade agreements and creating an economy that creates more jobs and better wages for them and their families.

Trump’s Administration is not hitting on all cylinders yet, but they are hitting on more cylinders than the national media or Jeff Flake want to acknowledge.

Bob Corker is another one who got crosswise with his voters and now feels liberated to speak his mind about his concerns with the temperament of this President.

He wasn’t that concerned about the President’s temperament when he openly auditioned to be his Secretary of State.

Bob Corker famously won his initial race for the Senate when the Republican National Committee ran a race-baiting ad that showed two white girls asking Corker’s opponent, Harold Ford, to call him from the confines of the Playboy mansion.

It was a terrible, terrible ad that impugned the reputation of a really good guy in Harold Ford.  But it was also pretty effective, and Corker was able to barely squeak by in a very close race.

My only point in bringing this up is that to blame Donald Trump for the coarseness in our political debate is, well, ridiculous.

The political process was broken well before Mr. Trump ever threw his hat in the ring for the White House, and it wasn’t broken by him.  It was broken by the politicians and their political consultants, most of whom now routinely condemn the President, his divisive rhetoric and his untruthfulness.

If the political class had spent less time usually racially loaded rhetoric (on both sides of the debate) and had spent more time being more concerned about the political promises that they knew that they would never keep (from you can keep your health care if you want it, to we are going to repeal and replace Obamacare), they would have been able to fend off the Trump challenge to our body politic.

Bob Corker, who I am sure is a nice guy whose heart I am sure is in the right place, lost faith in the legislative process before he decided to call it quits.  As a Member of the Budget Committee, he called the entire budget process a sham and a fraud and a waste of time.

He might be right about that, but as far I know, he hasn’t done much to try to fix that process or to offer any constructive ideas that would garner enough votes that would actually make it more credible.

And none of that is Donald Trump’s fault.  Trump knows as much about the legislative process as I know about quantum physics.  Which is nothing.

They don’t like it and so they figured they would give Donald Trump a try.