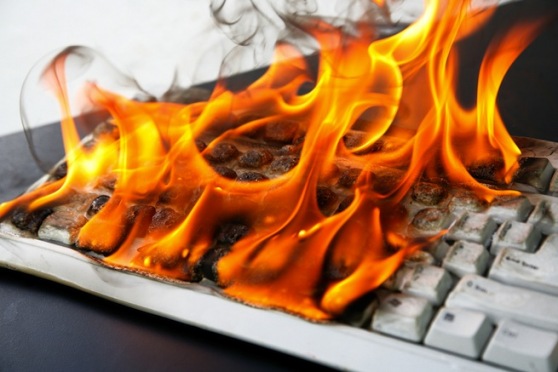 The Constitution made it pretty clear that Congress has the responsibility to declare war.  The founding fathers did that for a reason.  Only when Congress declares war does war have the stated approval of the American people, through its representatives.   And that state approval gives war-making legitimacy.
That important principle has been lost as of late.

Revelations the New York Times that we launched a cyber-war against Iran might have brought a smile to those who hate Iran, but war is war.   The Iranians have a right to be pretty pissed off about that.

Iran is not exactly a sympathetic figure here.  They launched an undeclared war against the West back in 1979, and that war has never really stopped.  But without Congressional approval, the actions of any administration that veers over the line towards war are seen as illegitimate in eyes of the world community.

Why should we care about the world community?

Well, because we need them to understand that America is not a rogue nation, and when it acts in an aggressive manner, it acts on behalf of the American people.  If an administration acts without the consent and approval of the people, the action itself loses legitimacy.

Now, I guess you can make the case that these actions are all connected to President Bush’s original war on terror resolution.  But the Obama Administration has done its best to distance itself from the language of the war on terror.  For example, they no longer call it the war on terror.  And it has been largely assumed that the war on terror was all about Afghanistan (Iraq had been authorized under a separate Congressional action).

It is often assumed that getting Congressional approval is an anachronistic remnant of the past.  But I think that is a big mistake to just let a White House (any White House) to wage an undeclared war on any sovereign nation.

The President shouldn’t have the right and the ability to be the judge, the jury and the executioner.  It was recently revealed that Mr. Obama himself reviews a kill list, terrorists who are marked for execution (some of whom are American).

Most Americans would probably approve of the folks who made the list, and undoubtedly the war would be a better place with most of them being rubbed out.  But we don’t, as a society, just willy-nilly allow our government to kill people because they might be a nuisance or a threat.  We didn’t target leading Mafia figures for execution, for example.  We don’t simply target drug dealers today.

We believe in the rule of law.  Without Congressional approval, there is no rule of law.  There is just the whims of a bureaucracy that says “trust us, we are doing this to protect you.”  No offense, but I don’t want to trust the right to kill on behalf of the United States only to a few bureaucrats or politicians.

We should get back into the habit of having the Congress declare war if we are going to go to war against our enemies.  It brings more legitimacy to our efforts and oh, by the way, it is required under the Constitution.