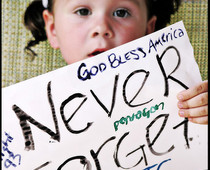 I turn the television on first thing every morning. Never again, will I wait until I hear what is happening in the world from somebody else. September 11th did that to me.

This anniversary is handy because I remember pretty clearly what my life was like ten years ago. I was working hard as a Congressional staffer. I was single, and childless. I didn’t really think too much about mortality, because when you are in your mid-thirties, you think you will live forever.

Plenty of people in their mid-thirties saw their lives snuffed out overnight a decade ago, and if that doesn’t inject some urgency into living each day as it could be your last, nothing will.

I am a decade older and maybe a decade wiser, but I am not sure if that sentiment is widely held about me or about the country. As a country, I’m not sure if America has really learned anything. We can’t figure out how to get our economy started. We can’t figure how to feed the hungry and get the obese to eat a little less. We still aren’t sure if we will accept a little more risk in our life in exchange for more freedom. And the rest of the world baffles us if we even think twice about it, which most of us rarely do.

Political discussions haven’t matured much. Discourse isn’t getting any more nuanced. We don’t have a modern version of Firing Line (although Charlie Rose has a nice show). Political philosophy now centers mostly on how we can scare the hell out of people so can get some more money out of them.

I was waiting to do a talk radio show the other day and the two commercials that played before I was to go on was meant to freak people out. One hawked gold, intoning that the financial world is getting ready to collapse. The other one hawked sealed food packages, for when the actual world collapses. It also advertised bomb shelters, just in case.

The media hasn’t really matured much. The big controversy these days is whether those poor idiots who agree to appear on the Real Housewives television shows are being exploited for being idiots. Probably, but they have it coming.

The World Wrestling Federation has been displaced by Ultimate Extreme Cage Fighting. These guys fight for real, by the way.

It seems that some Republicans want to re-litigate both evolution and Social Security. These fights were largely settled 75 years ago. Are we moving forward or backward?

Everybody is patriotic these days, and I suppose that is just fine. But it seems to me that it is patriotism born not of experience but of longing and in some cases, of loss. At the conclusion of the Second World War, everybody knew what we had just been through. These days, only a precious few have been asked to give more. The only sacrifice most people now are expected to deal with is being patted down at the airport every once in while.

During the Second World War, taxes went up big time and domestic spending went down big time. Over the last decade, most people’s taxes went down big time and domestic spending went up at an even bigger pace. Unless you were in the military, we didn’t ask anybody to do anything to help us win this war, except maybe stand up during the baseball game when the wounded warriors are introduced.

This is not really a criticism, just an observation.

What happened on 9/11 was terrible, horrible, searing, but we shouldn’t overdo its impact. It was an event that happened in a history of many events that happened to this country.

We have to move on. We have to turn the page. We can’t keep living in a state of unnecessary panic. We have to grow up and mature, and start facing the big problems that confront a country that has been at war for a decade and has asked the vast majority of its people to contribute nothing to the effort.

This last decade hasn’t been the worst decade in American history. Not even close. It started terribly, yes. But for most Americans, they have bumped along, beset by anxiety but not by crisis.

It is time to put September 11th in the history books, and look forward to the future. We should insist that our political leaders look not to the next election for their inspiration, but to the next fifty years. It is time to move forward and grow up.

Someone once said that history is just one damn thing after another. 9/11 was a damn thing. Let’s move on to the next one.